After Saudi Arabia introduced a package of socio-economic reforms, Leejam introduced a women-only club brand and conducted a successful IPO. Now, executives have set their sights on Leejam 3.0.

International fashion, business, and finance may revolve around cities such as Paris, New York, and London, but with three-quarters of the earth’s population within a five-hour flight time, the Kingdom of Saudi Arabia (KSA) really is the center of the world, suggests CEO Ahmar Azam and acting chairman Ali Al Sagri of the Leejam Sports Club Company.

Leejam is already the largest health and fitness provider in the KSA, operating its fitness centers under the Fitness Time brand, but its ambitions and objectives are much grander. Al Sagri intends to transform Leejam into one of the 10 largest club operators in the world, as well as the employer of choice in the KSA, within the next three years.

“When I joined the company in 2014, we had approximately 40 fitness centers, and today, we have more than 160 locations,” says Azam.

A number of factors—some global and some local—seem to be aligning to make Leejam’s plans seem viable.

The fitness industry continues to expand internationally, and there doesn’t appear to be an end in sight. And, says Al Sagri, “In 2017, the government of Saudi Arabia introduced Vision 2030, a package of socio-economic reforms that emphasizes quality of life. It focuses on promoting health behaviors, which loosened restrictions on women’s activities, including exercise.”

The same year, Leejam introduced a women-only club brand, and the following year, it conducted a dramatically successful IPO that raised $220.6 million. 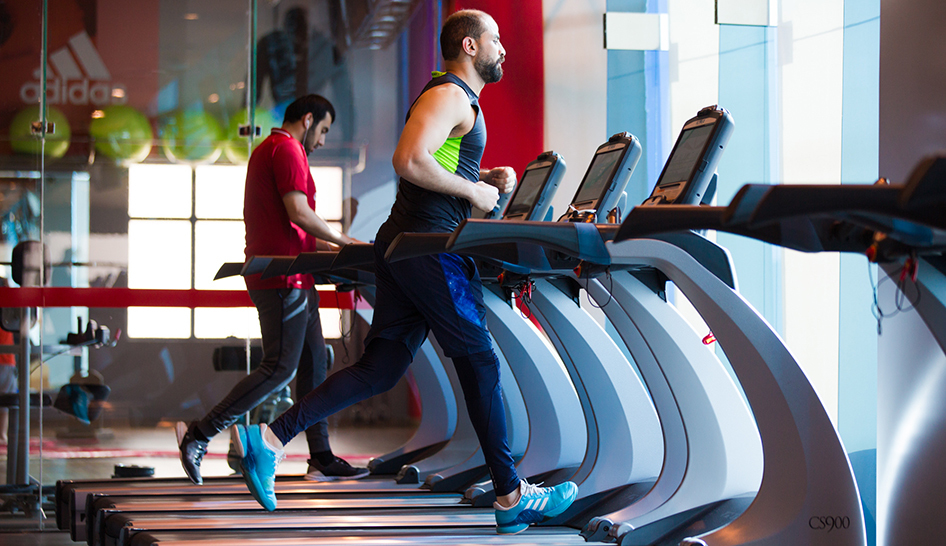 Keeping Up with the Pulse of the Fitness Market

Al Sagri and Azam both have extensive corporate pedigrees. Al Sagri was raised in the KSA, belongs to a prominent Saudi family that owns several businesses both there and in Europe and the U.S., and was educated in the U.S. After returning to Saudi Arabia, he joined Leejam’s board, and has since been instrumental in guiding the company.

Azam was raised in Pakistan, graduated from the prestigious London School of Economics and Political Science, became a chartered accountant, and moved to New York in 1999 where he worked in a number of executive-level positions with several blue-chip organizations. He moved to Saudi Arabia in 2011, and was approached by Leejam in 2014 to head a corporate transformation and lead the IPO.

“To be honest, my knowledge about gyms was limited to what I’d learned by pursuing a healthy lifestyle,” he says, “but I didn’t know much about the fitness industry. When I got involved and recognized the value—both with respect to the impact on the lives of individuals and the scale of the financial opportunity—I got passionate about the business.

“Every executive’s dream,” he says, “is to take a company public. I’ve worked very hard in different industries for 25 years, but I’ve had to wait almost 20 to find something that really fired me up.”

The Leejam IPO exceeded everyone’s expectation. “It proved one of the most successful on record, attracting more than 40,000 subscribers, who have since benefited from an over 44% increase in the share price, which recently stood at $17,” Al Sagri says. “The indicative price, according to a recent report, is approximately $22 per share.”

Now Azam, along with Leejam’s executive team and board of directors, bears the responsibility of taking the company to the next level, a stage he refers to as Leejam 3.0.

“I didn’t know much about the fitness industry. When I got involved and recognized the value—both with respect to the impact on the lives of individuals and the scale of the financial opportunity—I got passionate about the business.”

Leejam 1.0, Al Sagri explains, represented the firm’s entrepreneurial phase, while Leejam 2.0 concentrated on defining its corporate structure, laying the foundation of a sustainable business, and preparing for a public offering. The third stage, Leejam 3.0, will be focused on executing its aggressive, three-year business plan.

Leejam’s unifying club persona is Fitness Time that, with six separate brands, operates men- and women-only centers in 28 cities throughout the KSA and in the United Arab Emirates (UAE). Its portfolio includes Fitness Time, as the main offering; Fitness Time Pro, a more affordable model; Fitness Time Plus, its executive-level offering; and, for kids, Fitness Time Junior.

Fitness Time accounts for 12% of all of the fitness centers, and 27% of all memberships, making it the biggest fitness company in Saudi Arabia. “In Riyadh, you’re never more than 5-10 minutes away from a Fitness Time facility,” say Al Sagri. “We’re your neighborhood gym.

“But,” he adds, “we’ve only touched on the growth potential of this market.”

He estimates the upside potential at 13 million people.

The need and the opportunity inherent in it are both clear, and the implementation of Vision 2030, which has opened the door to women participating more fully in physical activity, is destined to have a major impact. For the first time, women-only health clubs are officially sanctioned.

“It’s given us that other 50% of the population that’s ready to exercise,” says Al Sagri.

Leejam’s history, and its deep roots in Saudi culture, its appealing and potent value proposition, business sophistication and expertise, financial strength and stability, and recently the opening of Fitness Time Ladies, and a remarkably rewarding IPO—all of these have given Azam what he believes he needs to deliver on Leejam 3.0.

To achieve that objective, he’s identified six key drivers. They are:

“The entire organization is fired up by this vision,” he says. “People connect emotionally to what we are and what we do. We’re a local brand, and people are proud to see a Saudi fitness brand on the world stage. ... We want to continue to provide a great service to the community here.”

One of the secrets to satisfying its constituencies—staff, members, and investors—is Leejam’s understanding of their current needs and evolving expectations. “An appreciation of localization is key,” Al Sagri emphasizes. Given the Kingdom’s relatively conservative environment, Fitness Time locations provide areas where members can pray, if they choose to; make no use of loud commercial music; and offer impressively spacious facilities.

“People are used to having their personal space,” Al Sagri says. “They don’t like having to wait for equipment, and they don’t like being packed into a fitness center like sardines.”

A “completely Saudi” brand, Fitness Time seeks to comply with the government’s “Saudization” requirement, and more than 34% of its over 34,000 employees are Saudis.

Azam wants to “open up” communication with staff, and intends to prioritize employee training. “We’re investing heavily in developing local talent. The next set of leaders is coming from within the Kingdom. And, putting our money where our mouth is, we’re taking 20 of our key managers to the IHRSA 2019 convention and trade show in San Diego.”

Among the other upgrades that he’s pursuing are intensified use of technology (“Wearable technology is the trend of this millennium,” he says)—and the leveraging of new programs (“Personal training is an emerging trend in Saudi Arabia”).

“People are used to having their personal space. They don’t like having to wait for equipment, and they don’t like being packed into a fitness center like sardines.”

Though Leejam is focused on the Kingdom in a special way, its aspirations include everything from developing clubs in other Middle Eastern countries to the possibility of franchising.

And then, of course, there’s Fitness Time Ladies.

Responding to the Needs of a Changing Saudi Market

In 2016, anticipating the sea change that was about to take place with respect to women and exercise in the KSA, Fitness Time began to study its portfolio of properties, and to evaluate the design, development, and staffing requirements of creating a women-only line.

One of the first steps it took was to hire Susan Ward to breathe life into the new brand. A British national, Ward had trained as a fitness instructor after leaving the Royal Navy and worked in club management before she became the operations manager of the Dubai Aquarium and Underwater Zoo.

Introducing an original, brand-new product in any market is a daunting challenge, but—Ward was confident—not an insurmountable one. Because the clubs could only be staffed by women, and female fitness staff didn’t exist as such in the KSA at the time, she was obliged to go to Egypt, Jordan, Morocco, and Tunisia to find qualified instructors. Because she didn’t speak Arabic, she had to rely on translators. And, even when all was in place, she had to wait for a license from the government and the country’s General Sports Authority. 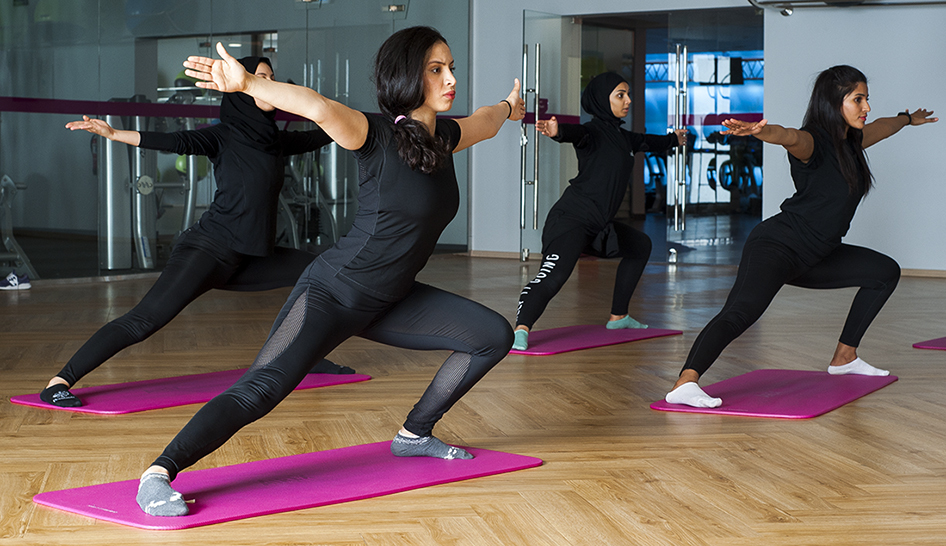 In July 2017, making use of a repurposed men’s gym, the first Fitness Time Ladies facility made its debut in Riyadh, becoming the first licensed, female-only fitness center in the KSA.

In anticipation of the opening, Leejam launched a website inviting people to indicate whether they had an interest in acquiring a membership. Within the first week, 75,000 women had registered.

To respond to the market’s needs, since then, a total of 17 men-only sites have been converted into women-only properties, and now serve over 40,000 members. Today, Fitness Time operates 28 women-only facilities and plans to have 40 by the end of this year, making it the largest women-only operator in the Middle East.

An ambitious—some would say daring—development plan calls for the company to open 15 new female centers this year, and to have 85 operating within five years.

The women’s clubs replicate the amenities offered in the men’s facilities. They average 30,000 square feet in size; offer a wide range of classes, including yoga and boxing; and provide a gym, exercise studios, basketball and volleyball courts, sport-specific areas, an indoor running track, a pool, sauna, steam room, and lounges.

All are completely air-conditioned, given the fact that summer temperatures in the KSA can reach 109 degrees.

“Fitness Time Ladies is not only about giving females a center where they can exercise. It’s also about offering them a place where they can socialize, take off their abayas, and be free.”

Leejam also has recently taken over the operation of the 275,000-square-foot sports complex at Princess Noura Bint Abdul Rahman University, an educational institution for women in Riyadh, one of the largest fitness centers in the world.

“Fitness Time Ladies is not only about giving females a center where they can exercise. It’s also about offering them a place where they can socialize, take off their abayas, and be free,” says Ward. “They can actually run for the first time. They can swim. It’s a space where they can breathe. It’s quite a liberating experience for many!

“I’m building a legacy here,” she says enthusiastically. “I’m helping people change their lives in ways that others can only dream about.”

Catherine Larner is a contributor to Club Business International.