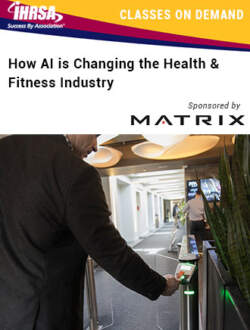 How AI is Changing the Health & Fitness Industry [CLASS]

Understand and leverage artificial intelligence (AI) for your business. This IHRSA Online Learning class is available to you on-demand with in-depth content.

How AI is Changing the Health & Fitness Industry [CLASS]

Understand and leverage artificial intelligence (AI) for your business. This IHRSA Online Learning class is available to you on-demand with in-depth content.

AI is like an iceberg with its massive set of capabilities and innovation hidden beneath its already surfaced abilities. This class does not require any specific knowledge on AI, machine learning, programming and mathematics. Instead, the class will help you understand the impact of AI in the fitness and health industry as well as teach you how to leverage AI in your current role. You will also become familiar with the common terminology used in AI, machine learning, and computing.

Computer scientist Valerie Bures-Bönström is a co-founder of Mrs.Sporty, a European chain of fitness clubs that has received numerous awards for its concept since 2005. With over 190,000 members in 540 Clubs in seven European countries, Mrs.Sporty is one of the market leaders in women's fitness as well as one of the leading franchise systems in Germany.

In order to bring the Mrs.Sporty training concept to perfection, Bures-Bönström set out to find a way to make the training highly effective and, above all, safe. The development of the innovative Pixformance software for functional training was the beginning of her company called Pixformance Sports GmbH. Since its founding in 2012, the company has continued to advance digitization in the international fitness and health market and has now opened two branches in Germany, Japan, the USA, and the Netherlands with more than 200,000 fitness enthusiasts.

As a CEO of Pixformance Sport GmbH, Bures-Bönström supports self-employed people, companies and institutions in increasing their efficiency and effectiveness through the innovative use of technology to help them successfully redefine themselves in the health and fitness industry.