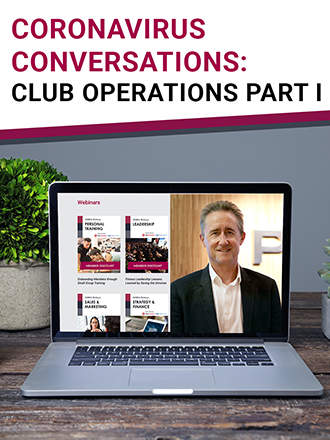 Join Colin Grant as he shares his experience overseeing Pure’s 30+ locations across South Asia in the wake of the coronavirus pandemic.

Join Colin Grant, CEO of Pure International Group, as he shares his experience overseeing Pure’s 30+ locations across South Asia in the wake of the coronavirus pandemic. Learn how Grant and his team have been dealing with the COVID-19 pandemic, facing closures, communicating with staff, and working to retain their members. It is safe to say that Pure Group, which successfully operated through the 2003 SARS virus, are reasonably well-prepared and experienced under these conditions.

No matter what stage of the outbreak your region is in, coronavirus has been impacting all businesses in some way across all industries. Learn everything from cleaning procedure, to staff and member communications, and onward to planning for the future of your facility.

Co-founded in 2002 by Colin Grant, the Pure Group has grown from one yoga studio with two teachers in Hong Kong to over 30 locations with more than 2,000 staff and around 600 yoga and fitness classes a day across Hong Kong, Shanghai, Beijing, Singapore, and New York. Through the brands Pure Yoga, Pure Fitness, Pure Apparel, nood food and MyPureYoga, Pure Group now encompasses yoga, fitness, active wear and healthy eating as an integrated community dedicated to helping people lead a balanced 360 degree lifestyle.

Good health and athleticism have always been a part of Colin’s lifestyle. He played tennis semi-professionally and impressively ranked as the top seeded player in Hong Kong for over a decade, participating in various international tournaments such as the Davis Cup and Wimbledon.

Colin has had an entrepreneurial spirit since a young age, including multiple successful business ventures. He fell instantly in love with yoga in 2001, and embarked on opening his own studio with the help of friends Bruce Rockowitz, Almen Wong and his first yoga teacher from Whistler, Patrick Creelman. Six months later, Pure Yoga was born. He subsequently started Pure Fitness in 2003, launched Pure Apparel and nood food in 2013, and MyPureYoga.com in 2016.

Pure Group has since grown into the undisputed leader in Asia’s wellness industry.