Viewing core training from a variety of perspectives provides a comprehensive sense of what is...and isn't.

In all probability, core fitness is as old as any other training concept, and, in terms of programming, has been popular for well over a decade. It held a top-five spot among the 20 regimens listed in the American Sports College of Medicine’s (ACSM’s) Annual Survey of Fitness Trends between 2007 and 2010.

But it retains its popularity, and, in a sense, remains on the list. It’s been co-opted, this year, by other types of exercise—bodyweight training (No. 2); strength training (No. 5); group training (No. 6); and functional fitness (No. 12)—all of which utilize core training, to some extent, as a basis for stability.

From a technical standpoint, we know that core training targets the muscles around the abdomen, spine, and pelvic area to increase strength, flexibility, and stability. Beyond that, though, you’ll find a variety of views and convictions having to do with its application and execution. To create a comprehensive sense of the subject, CBI spoke to a number of experts, from across the fitness spectrum, about their core beliefs and philosophies—pun intended—current trends, common fallacies, and more.

“Core Belief: Knowing that core training has nothing to do with the ‘six-pack’ muscles is super-important. These muscles are glorified in trendy fitness classes, with students performing sit-ups and crunches, which can end up hurting your neck and low back.” 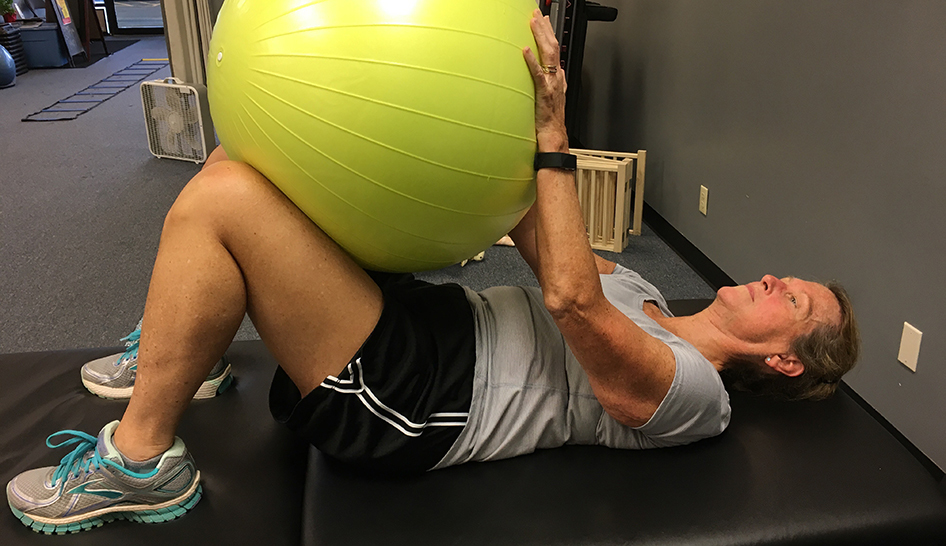 A Coors client who lost 135 pounds

Coors founded the Women’s Fitness Association (WFA) in 2013. The WFA is an inspirational group of fitness professionals and exercise enthusiasts who share their knowledge with one another, and supply teachers and presenters to other nonprofits in Greater Cincinnati. She launched Coors Core Fitness, a medically oriented personal-training studio, in 2006; based in Cincinnati, it has five satellite locations in the city.

According to Coors, a core program should encompass 10 phases.

“Our model is based on spinal stabilization research,” she says. “We start all clients at phase one, which is supine, with pelvic tilts and bridges. Once they master this phase, we proceed to phase two, and so on. In our model, phases four and five involve planks, and phase 10 is sit-ups, so there’s a lot of built in flexibility. For example, clients with spinal dysfunctions don’t go past phase one or two.”

The program also emphasizes education. Before any client takes part in the training, they’re taught about the components that make up the core—the transverse abdominis, multifidus, internal and external obliques, pelvic floor, entire spinal cord, gluteus maximus/minimus, and medius. It may seem counterintuitive, but the one group Coors doesn’t include is the rectus abdominis, which make up the vaunted washboard abs.

“Fitness magazines make people believe that the core is the six-pack,” says Coors. “They also make you believe it’s a standalone muscle. In reality, the true core muscles—transverse abdominus, etc.—provide stability throughout the entire trunk area to connect with every muscle in the body. That’s much more important than getting a six-pack.”

Because Coors’ members come in every age, shape, and ability level, the one thing they often have in common is an inability to engage their core.

“When teaching them a pelvic tilt/neutral spine, they just can’t connect,” she says. “However, one of my trainers taught me a ‘ball push exercise,’ which can really help. Have the client lie on their back with knees bent. Place a stability ball on the stomach, and have them press the ball into their legs with shoulders relaxed. Have them do five 10-second sets. It’s a simple core exercise that even the most challenged clients can perform.”

“Core Belief: The primary benefit to strengthening the core is enhanced athleticism. It’s necessary to have a strong stable core that can stiffen quickly when pressing a weight overhead, throwing an object, or landing a stiff punch. These qualities are required for optimal performance and for reducing the risk of injury.” 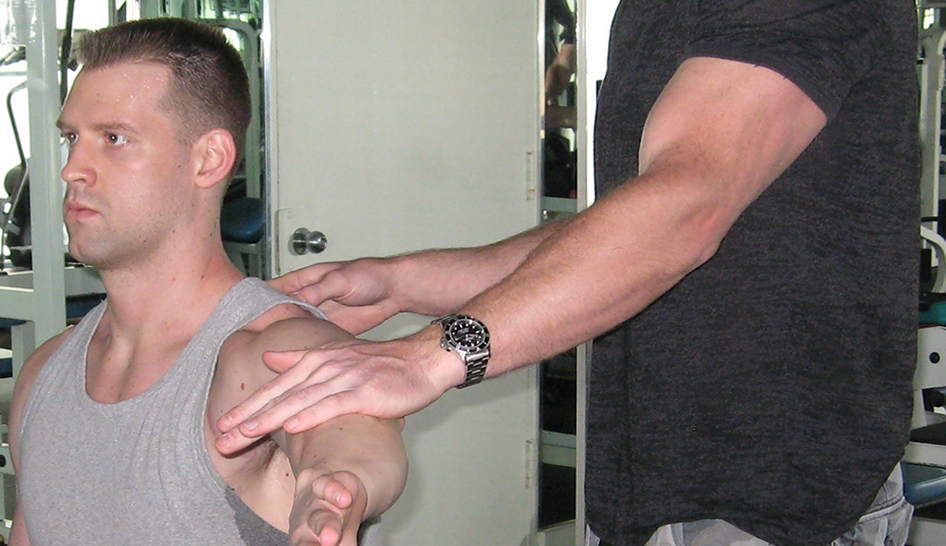 Founded in 1998, ISSA offers a wide range of personal-training certifications, including the Corrective Exercise Specialist Program developed by Waterbury.

Describing what users look for in core training, he observes that many gravitate toward exercises that create the greatest “muscle burn” within the abdominals. Because performing a crunch for high reps creates an intense, localized burn, he believes that particular exercise will probably remain a staple for eons, but calls it “a shame.” He points out that there are more effective alternatives that target a much larger number of muscles throughout the midsection.

“One of the most important things to understand is that your ‘core’ isn’t limited to the abdominal muscles,” he says. “The definition of ‘core’ is ‘the central or most important part of something.’ In reality, the true core of the body is the pelvis—the meeting point between the spine and lower extremities. This is the area that benefits from being especially strong and stable.

“It’s also essential for the lats to be strong—that’s because the lats merge into the thoracolumbar fascia within the lowback region and help support the lumbar spine. Performing compound exercises—such as the deadlift, standing military press, and front squat with a four- or five-rep max—are all excellent for strengthening the core.”

ISSA’s Corrective Exercise Specialist course takes a unique approach to developing the core through all three planes of movement.

“All three layers of the abdominal wall, as well as the hip’s external rotators and abductors, should be activated whenever possible; and, of course, lat activation during certain core exercises is key,” explains Waterbury. “In essence, our course attacks core training by developing the muscles within the trunk and pelvis that are most commonly weak, even in high-level athletes.

“We also focus on increasing the duration of the exercise,” he continues, “or performing the drills more frequently, which research has shown increases cortico-motor excitability—which is just a fancy way of saying the ‘mindmuscle link.’ That’s why most of the drills and core exercises in the course don’t require any equipment and only take a few minutes. As a result, they can be performed at home, in the office, or anywhere else.”

“Core Belief: The principle value of core training is the myriad benefits associated with it, such as improving posture, total-body strength, aesthetics, injury prevention, and pain reduction.” 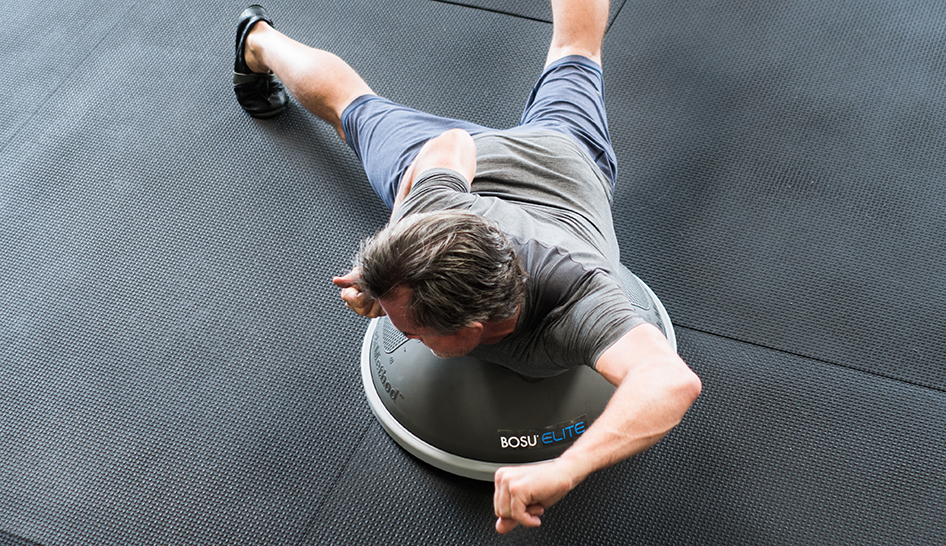 The Weck Method relies on the BOSU Ball

In 2000, Weck invented the BOSU Ball, which is now a staple of core training. “The discovery emerged from more than a year of intense chronic back pain,” he relates. “After trying everything I could, it was training with a stability ball, and then standing on it, in particular, that put me on the path to recovery. Several falls off the ball led to my ‘Aha!’ moment. ‘What,’ I wondered, ‘if I cut the ball in half?’”

Weck created a prototype the next day, which has since led to millions of dollars in global retail sales and a number of related products, including the BOSU Elite, a new kind of ball designed for resistance training, and the RMT Club.

Weck expresses concerns about what he regards as a misconception about core training.

“The emphasis on bracing the core to maintain a neutral spine, and an overly myopic emphasis on transverse plane movement, has led to a great deal of confusion,” he says. “This has spawned an ‘anti-rotation’ core training movement that’s actually detrimental to athletic performance.

“Bracing the core with a neutral spine and resisting force in the transverse plane doesn’t make you move better,” he says. “There isn’t a sport of any kind where this occurs, and the body positioned this way, bracing tight, is both weak and ineffective.

“Contrary to popular misconception, the core doesn’t only transmit force from the hips and shoulders. It also generates rotational power. And the strongest, safest way to rotate is with a combination of side-bending in the frontal plane, and counter rotation of the hips and shoulders in the transverse plane.”

Looking forward, Weck sees a “massive shift” soon taking place in the way the entire fitness industry deals with core strength. It will be driven, he suggests, by elite athletes and the results they achieve with new training predicated on what he calls empirical objectivity.

“It’s training that focuses on ‘faster, farther, heavier.’ It’s diametrically opposed to many of today’s ‘best practices.’” Slowly, but surely, he predicts, the methodology that produces the best results at the highest levels will trickle down to personal trainers and their clients. 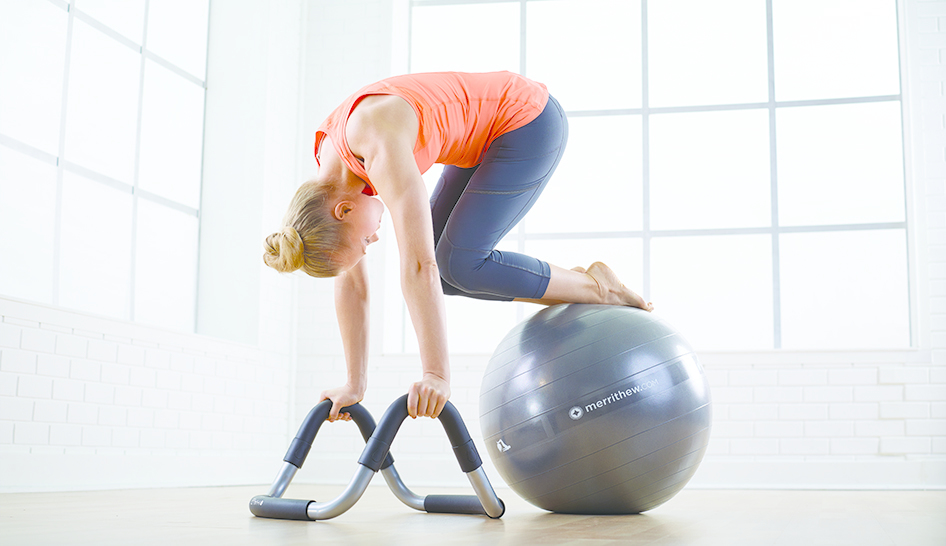 Since opening its first studio in 1988, Merrithew has been a driving force in Pilates. Today, it provides a wide range of products and education and training services. Its brands include STOTT PILATES, ZEN•GA,

Andersen’s focus is on quality—first and last.

“Core training is based on quality movement—it’s all about that,” he says. “It’s not how much you train, but, rather, how you train that matters. In the case of the core, that means training smarter.

“In our CORE program,” he says, “there’s a focus on the ‘why’ of movement, which is the root of intelligent training. If you know why a movement is being performed, it helps you to better apply the tools you have. A hammer is useful if you’re working with nails, but if you have screws, a hammer is useless. It doesn’t mean it’s not an effective tool. It’s effective only when applied the right way. It’s the same with movement and exercise.”

It’s not unusual to see core routines that utilize little or no equipment, but Merrithew’s CORE program employs it to achieve two ends: to give users a point of focus, and to take some of the emphasis off the rigor of the exercise, and place it, instead, on using the gear properly.

“Core Belief: Remove the arms, legs, and head, and what’s left is the core—those stabilizing muscles of the spine and trunk. The core forms the basis of any strength-training program. A weak core leads to weak arms and legs. A strong core helps the client lift heavier weights and reduces the chance of injury.” 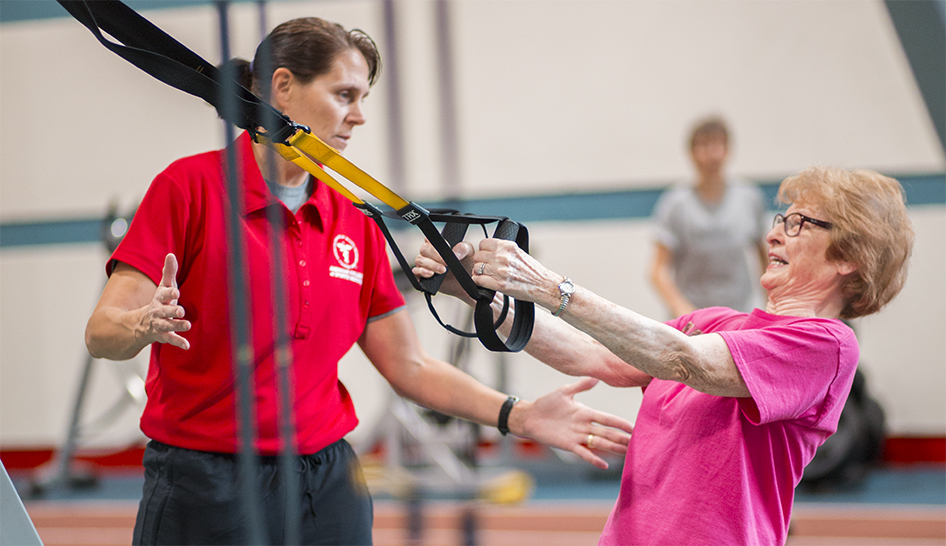 “Most club members will be impressed with what happens to the abdominals as a result of core training, but that’s not the whole story,” he says. “Core training is not just about ‘six-pack’ abs. Great fitness professionals develop a strength-training program that addresses all aspects of core work and related muscle groups.”

Thompson is an advocate of core workouts for everyone, an objective that the ACSM takes into account in the work that it does with the industry at large. “Core training has been the foundation of most exercise programs, for all kinds of clients and patients, and the certification program of ACSM reflects that position,” he says. “In fact, all of our certification training programs include some aspect of core training, and that won’t change any time soon. Core training is central to a safe way to exercise, and safety will always lie at the core of ACSM.”

While ACSM recommends core regimens for every population, they’re particularly important for seniors, Thompson points out.

“When they take part in core training,” he says, “the elderly have more endurance and strength for activities related to daily living. Imagine, for instance, hitting a golf ball further than your partners because you have greater strength and muscular endurance. Core training is about feeling good both physically and mentally.”