The IHRSA Innovation Summit. Register for the must-attend virtual event for fitness professionals on September 17. 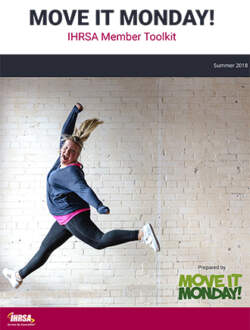 Move It Monday is more than a hashtag. This toolkit has everything you need to be a part of this weekly international campaign to get people of all fitness levels moving.

Move It Monday is more than a hashtag. This toolkit has everything you need to be a part of this weekly international campaign to get people of all fitness levels moving.

Mondays may have a reputation for being difficult, but did you know Mondays are also when people are most motivated to exercise?

According to the Monday Campaigns, a 2014 national poll found that the vast majority of respondents picked Monday as their preferred day to start an exercise routine. People are also more likely to visit the gym on Mondays—studies of college campus-based gyms and other fitness centers show that more people used the gym facilities at the beginning of the week than at the end of the week. Additionally, Google searches related to exercise are higher on Mondays, which means that people are looking for information about gyms and exercise routines more on Monday than other days of the week.

This toolkit—created exclusively for IHRSA members to implement Move It Monday in their clubs—contains:

“Research shows people who exercise on Monday are more likely to exercise later in the week, and IHRSA data shows members who use their gym membership 100 times a year (or roughly twice a week) keep their membership longer than those who visit less frequently.”