From live and recorded workout classes to onboarding new members, virtual fitness has a use for almost all needs.

Those are just a few of the buzzwords that are often used to describe virtual fitness (VF) offerings.

Though VF seems new, the concept actually isn’t. It arrived on the health club scene more than 15 years ago. What is new is the rapid expansion that it’s currently undergoing, and the quickly proliferating number of formats in which it’s being presented.

“An estimated 12,000 clubs worldwide now offer a virtual option, and, in all likelihood, that figure understates the reality.”

When one thinks of VF, one generally imagines large—or huge—screens in dedicated studios, but, today digital programming, both recorded and live, also is being streamed to iPads, tablets, smartphones, other mobile devices, home television screens, and, even, home exercise equipment, such as the Peloton bike.

And what about the many TV exercise channels and shows, or the increasingly interactive consoles on commercial cardio equipment—do they, too, qualify as VF?

The Appeal of the Digital Domain

What’s the appeal? What’s the upside, and the downside, for users and clubs?

Digital services and devices are now ubiquitous. Many people take all of the ease, the convenience, and the endless doors they open for granted.

The modern consumer has adopted an “everything, everywhere, anytime” philosophy. In terms of fitness, they expect to have access to a virtually unlimited variety and number of workouts that complement their lifestyle, and that are available 24/7.

Clubs and other providers—or, if you will, competitors—are clamoring to meet the need.

For fitness facilities, VF holds out the promise of numerous benefits. Among them are greater utilization of underused studios, reduced training overhead, ease of operation, prospect and member appeal, applicability to every member population, increased sales, higher retention, the ability to serve members “outside” of the club.... The list, it seems, is limited only by one’s creativity.

VF allows facilities to introduce new class options in a cost-effective manner. “It boosts engagement and motivation by making it possible for clubs—ones that might not have the resources or instructors to introduce additional live classes—to offer their members more choices,” says David Packman, the marketing director for Wexer, a London-based VF provider.

“VF supports a company’s acquisition and retention efforts by connecting members with the club brand beyond the four walls of the facility,” says Jen Zygmunt, the senior vice president of sales and marketing for Wellbeats Inc., a VF producer based in St. Louis Park, MN. “By reducing the barriers to fitness, it can keep members involved with their club for a longer period of time.”

The question today is, “How can you make work for yourself?”

As far as the club prospect is concerned, VF still qualifies as one of the industry’s “next big things.”

For the club operator, it offers novelty, market differentiation, and a strong new membership pitch.

Tim Bowers, the owner of Anytime Fitness, a 24/7 facility in Mound, MN, was looking for a cost- effective way to grow membership sales, and at the same time meet the needs of his diverse member population. He decided to make use of Wellbeats to provide additional workout options and more class times.

Since incorporating Wellbeats into his revised prospect tour, he’s noticed a distinct spike in new membership sales. “The launch of virtual fitness has given us the flexibility to serve all of our members 24 hours a day, seven days a week,” he reports. “This definitely sets us apart from our competition.”

James Hoyle, the co-owner of several Anytime Fitness franchises in the U.K., has enjoyed a similar experience with Wexer’s VF product line. “The virtual system provides our gyms a unique and fantastic selling point that gives us an edge over our local competitors,” he says.

No one likes being a beginner, and health clubs often can seem intimidating to novices who aren’t comfortable with their physiques, their fitness level, or exercising in public.

VF may represent a viable solution.

“In the clubs I’ve managed, there was one group that gravitated toward virtual classes—brand-new members,” reports Carrie Kepple, the owner of Styles Studios, in Farmington, IL. “Our research showed that new members were far more likely to get started by attending virtual—rather than live—classes, because, as beginners, they found them less intimidating.

“They’d often develop their confidence in these sessions and then eventually move on to the live ones.”

Kepple, who’s also a member of IHRSA’s board of directors, is convinced VF can be a great onboarding tool.

“Generally speaking, it’s a great way for new people to get accustomed to classes,” he says. “When VF is offered in small bites—20- or 30-minute segments—it’s a far more comfortable way for a novice to ease into health and fitness. Since 80% of the population has never gone into a health club before, this represents a tremendous new opportunity.”

Medium has ‘Something for Everyone,’ Across Demographics 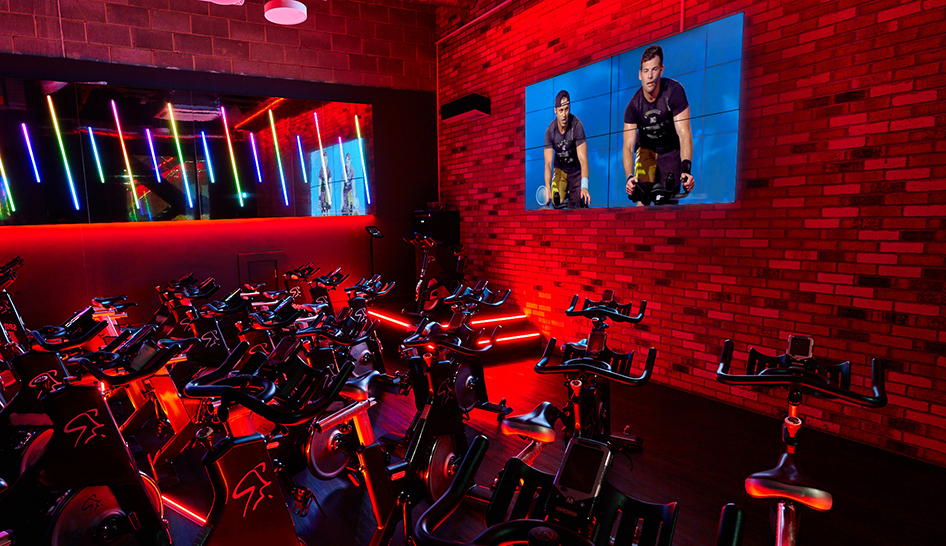 Many clubs, like Bowers’, have a diverse and evolving membership made up of individuals with proliferating and constantly shifting desires and needs. It’s a multi-factor dilemma, involving a multi-layered equation, but one, it appears, that VF might be equipped to solve.

The consensus suggests that—because of the infinite variability of the medium—it can serve the young and the old, the formerly inactive and the fit, the healthy and the athletic, those with chronic conditions, those with diverse tastes and interests, and the members of different populations. While VF connects, naturally, with digital natives such as Millennials and members of Gen Z, it also appeals to aging Baby Boomers and GenXers.

VF providers and practitioners both profess that it’s got “something for everyone.”

The fact that offerings also can be streamed to homes, offices, workplaces, and countless sites of other sorts seals the argument.

“Whether you’re looking for functional or HIIT training, mind-body or meditation, kids’ classes or workouts for an older population, there are plenty of choices in our extensive library,” says Packman. In all, Wexer offers more than 1,000 world-class workouts.

Wellbeats has more than 350 programs; Les Mills, a VF program pioneer based in Auckland, New Zealand, has some 600; and Fitness on Demand, a leading VF producer based in Chanhassen, MN, offers hundreds.

And as impressive as the numbers already are, the future applications appear unending.

Packman envisions, for example, a scenario in which personal trainers could tap VF archives—either supplied or their own—to create a customized catalog of workouts for their clients. And Zygmunt points out that virtual has the potential to address a wide range of health and wellness needs. “It can, for instance, be used to support physical therapy, healthy aging, and family-based fitness, without the added expense of hiring trained instructors to teach this array of classes,” she says.

Club owners and operators are exploring all of the inherent possibilities.

“We use Wexer for a variety of applications—virtual classes, live classes, member marketing, staff training, advertising revenues,” says Tom Lapcevic, the executive vice president at 24 Hour Fitness, the San Ramon, CA–based chain that has more than 400 clubs and over 4 million members. “It’s an integral part of our digital media ecosystem.”

Create a Plan for Success Before Introducing New Concepts 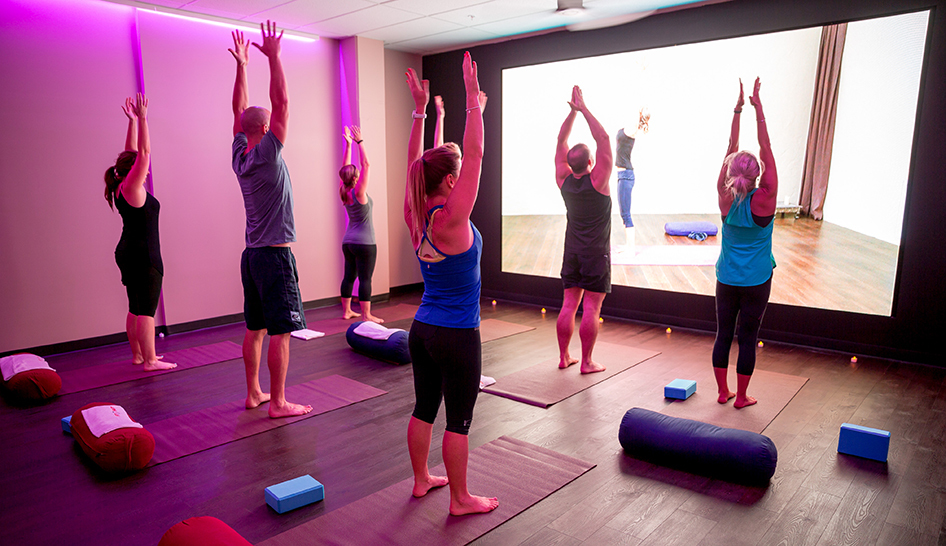 As with any other new program or technology that suddenly materializes in a club, VF requires a proper introduction and ongoing attention, or else it may well go unnoticed and be underutilized.

Don’t make the mistake, Packman cautions, of introducing VF, failing to promote it, and then being left to ponder why people aren’t using it.

Education—of employees, prospects, and members—and a strategic marketing and communications plan are essential.

Begin by making sure that staff and personal trainers fully understand the virtual offering, its many benefits, and how it enhances the club’s value proposition. “Make sure that the members of your team try the virtual classes for themselves,” he says. “And give them a clear marketing message that they can convey to members every chance they get.”

In the case of current clients, provide VF with the appropriate pre-launch promotion, e.g., posters, newsletters, and social media; stress that it will complement, rather than replace, live classes; provide tutorials on how the system works; schedule introductory sessions; and, going forward, make sure that it is featured prominently in all the club’s communications, including advertising, website, emails, etc.

“The main message should simply be ‘more classes more often,’” says Kepple. “It’s all about convenience, allowing members to access their favorite classes throughout the day or week. If they begin to enjoy virtual classes as much as regular ones, they may be tempted to try a live session.”’

Before she founded Styles Studios, Kepple had managed a club in New Zealand that was first to offer The Trip, a totally immersive group cycling experience created by Les Mills.

“Virtual fitness can seem intimidating for a new user when they see a touchscreen hanging on a wall,” says Zygmunt. “It’s important to show potential and current members how the product works, stressing the variety and type of classes, the options for beginning to advanced users, and the goal-based workout plans that are easy to follow.”

“Be absolutely sure that prospects and your members know that you offer virtual fitness,” says Packman. “You’ll be glad that you did.”