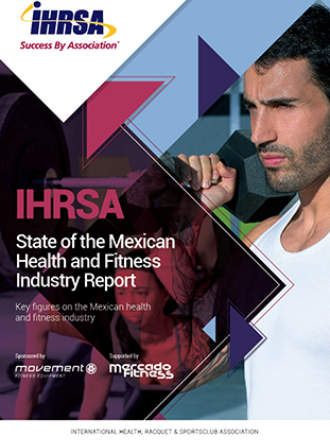 IHRSA State of the Mexican Health and Fitness Industry Report

This report provides a comprehensive examination of Mexico’s health club industry. This product is a PDF download. (Sponsored by Movement Fitness Equipment and is supported by Mercado Fitness)

According to this report, which was sponsored by Movement, and compiled in collaboration with Club Intel with support from Mercado Fitness, 12,376 Mexican fitness facilities generate an estimated U.S. $1.8 billion in annual revenue from 4.1 million members.

The report, based on a survey of 239 club operators representing 1,434 facility locations, indicates that more than four million Mexicans are members of health clubs, with a market penetration rate in Mexico of 3.2%.

“More than four million Mexicans are members of health clubs. In all, the market penetration rate in Mexico weighs in at 3.2%, signifying potential for growth.”

“To put that into perspective, the penetration rate is 18.5% in the United States for health club membership and more than 20% for health club utilization—so there is tremendous growth potential for the industry in Mexico,” states Ablondi.

This report provides a comprehensive overview and analysis of the health club industry in Mexico. Topline statistics on number of clubs, members, and market size are included along with a macroeconomic snapshot and in-depth analysis of club benchmarks and services. The report analyzes topics such as membership levels and fees, revenue results and growth, and programming trends.