This is an IHRSA featured article, brought to you by TRUE Fitness.

Why You Need to Rethink Your Health Club’s Design

The science of behavioral design is ideally suited for the fitness industry. Here’s how your club can take advantage.

At one point, designing the training space of your health club wasn’t very complicated. Free weights, weight machines, a cardio floor, and a room for aerobic and dance fitness classes—that was pretty much it. You may have had a pool or racquetball courts, but the standard gym model didn’t demand a lot of variation.

It’s a different world now. You have to account for the explosion in functional training, HIIT workouts, small group training (SGT) sessions, in-house studio experiences, recovery tools, and other innovations that are establishing a new standard in services and decor. The 21stcentury health club is not just a place to jump on a treadmill or lift a barbell or two—it’s a high-energy social environment and community center. And with a growing variety of workouts and recovery techniques in demand, you need to master space allocation, all while keeping your design, color scheme, and aesthetics brand-consistent.

“The 21st century health club is not just a place to jump on a treadmill or lift a barbell or two—it’s a high-energy social environment and community center.”

And you have to accomplish all this without neglecting the practical necessities: storage, locker rooms, compliance with ADA (Americans with Disability Act) regulations, etc. The IHRSA e-book, Built for Success: How to Maximize your Health Club’s Design, has a lot to say about these subjects, as well as accounting for acoustics, vibration, lighting, and other structural demands in your design.

This isn’t just an issue for startups—even established clubs have to rethink their design as the industry evolves. Keeping up with trends means not just ordering new equipment and replacing your flooring in the weight room. You need to create a space that will keep members motivated and encourage participation in revenue-generating activities.

It’s all part of the science of “behavioral design,” defined as a subcategory of design that is concerned with how design can shape, or be used to influence human behavior. To maintain a competitive advantage in a highly volatile marketplace, your club needs to keep people engaged and motivated.

Club designs and redesigns are make-or-break decisions. Considering the investment it requires to create a new club or remake a gym’s interior environment, you may need to bring in a design team to help you—even if you’ve been in the business for decades.

A Time for Creative Solutions 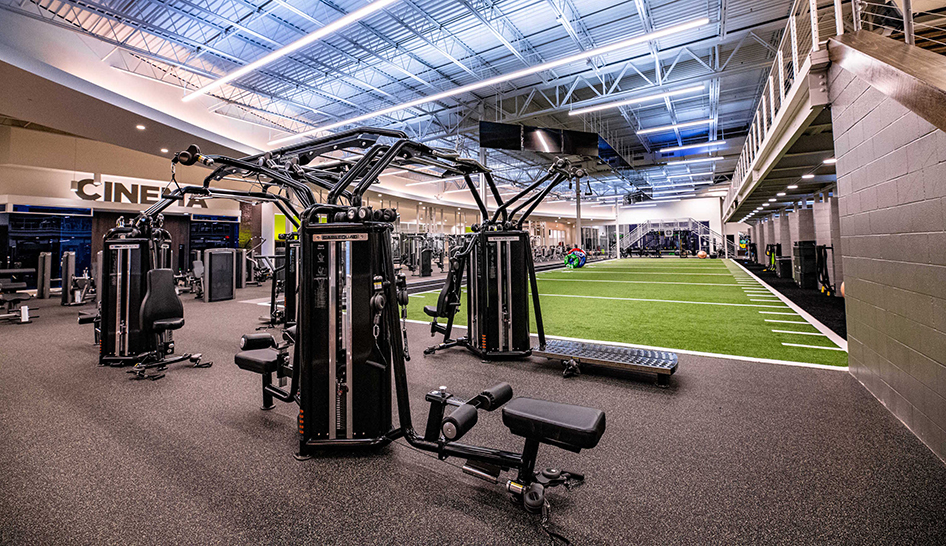 Christopher Salisbury, area director for Catalyst Fitness in Buffalo, NY, a chain of seven clubs owned by Joe and Amy Bueme, knows what it’s like to have to rethink the club concept on a regular basis.

“I've been doing this since the mid-90s,” explains Salisbury. “I'm constantly looking for new ideas on how to communicate health and fitness to the population. You're trying to figure out what's going to work best for your members. But to do that you really have to know the full scope of what's out there.”

With decades in the industry, Salisbury has seen the evolution of clubs over the years and made his own contributions to the growth and diversity of today’s health club concepts. For the Catalyst clubs, Salisbury was determined to put the training experience first.

“The important thing for us is the user's exercise experience. Our motto is, ‘United We Sweat.’ No matter how you like to exercise, we have the solution for you.’”

Salisbury was struck by the increase in functional training and diversity of fitness programming tied to HIIT and high-intensity workouts. Instead of giving Catalyst members a traditional club layout, he and the design team applied a “stadium-feel” concept, with track lanes, a 35-yard turf field, and a functional training staircase in the center of the club.

“It was 2019 and we wanted something that had the ‘wow’ factor,” says Salisbury. “The guys powerlifting, you used to put them in a dungeon in the back. Now, women are doing Olympic lifting, sled pulling, using kettlebells, all of it. We decided to create a space that was a spin on the way athletes really train. We put turf in the center, with racks right next to them. It gave the club a field house feel.”

The innovative concept satisfied the principles of successful behavioral design by fostering a feeling of excitement, teamwork, and community.

“We felt right now in 2020 that that style of training is what's hot. It's what people really like to see. And it definitely brought the ‘wow’ factor. It’s created a community feel and the vibe is really cool to see—the intensity of people working on turf and everything surrounding it.”

“My job as an area director is to increase memberships and personal training while keeping my members happy. It's a lot easier when you have the facility like the one we just made.”

Salisbury and his team didn’t do it alone. Even with all of his experience in the industry, he knows collaboration can always lead to better results.

“You can’t brainstorm by yourself.”

An Equipment Supplier and Lifestyle Brand

Helping to complete the stadium-style makeover with creative equipment solutions was TRUE Fitness, says Salisbury. TRUE has expanded their range of services and now offers consultation on facility planning.

What impressed Salisbury was the range of knowledge of TRUE’s sales team and their dedication to the task. Salisbury had worked with other equipment suppliers in the past who lacked that level of commitment and never sent representatives to his club. But TRUE was always accessible and available.

“They were calling me daily, asking ‘Have you thought about this?’ They definitely know what they're doing.”

Salisbury said TRUE would even recommend equipment that didn’t originate with the company if they thought it was best for the club. One piece, from a firm in Italy, has been a big hit with his membership. But TRUE doesn’t take a piecemeal approach—they kept the entire club concept in mind.

“The thing that we're most proud of is how it lays out, how the functionality works for our membership base,” says Salisbury. “We're a broad spectrum, big box club, so it's not like we only offer functional training or bodybuilding. TRUE provided fuel for inspiration that helped us make our vision a reality.”

“Their new selectorized circuit is going to the top in the industry, no question,” predicts Salisbury.

Equipment suppliers like TRUE are initiating a broader base of services to help club owners survive in disruptive times. In the end, it’s about strengthening their ties to health clubs.

“This is a time where relationship building in the industry is very important,” offers Salisbury. “TRUE kept showing up to help us out where they could. It makes a big difference.”