How 3 Gyms Are Helping Members Get Better Sleep

Three essential ingredients are required to achieve a healthy lifestyle, but one of them—sleep—is too often overlooked.

The members of the health and fitness industry are activists for healthy lifestyles—around the clock, and across the globe. The passion, energy, and professionalism that they bring to bear to help people improve their lives know no boundaries.

However, there’s still much work to do.

According to a study published last year in the Mayo Clinic Proceedings, less than 3% of Americans—we repeat, less than 3%—meet the basic qualifications required for a “healthy lifestyle.”

What does it take to achieve a healthy lifestyle?

It’s an important question to ask.

The average individual may believe all that’s required is to work out regularly and to eat intelligently. If that’s the extent of their understanding, then they’re missing out. Experts now agree that three essential pillars are required for lifestyle success. The third pillar is sleep— enough sleep, and quality sleep.

Earlier this year, Brent Gallagher, the owner of the Avenu Fitness & Lifestyle Studio, in Houston, TX, described sleep as the one issue that “no one in the industry seems to be talking about.”

“If we’re really going to transform the communities we serve, we have to position sleep as the No. 1 priority for people who want to be fit, lose weight, and simply feel good day in and day out,” he said.

Given the accelerating pace of life, and the proliferation of tasks and opportunities it produces, sleep deprivation is already a serious—and growing—problem. Last year, the U.S. Centers for Disease Control and Prevention reported that more than a third of Americans are not getting enough sleep on a regular basis. Among the consequences: reduced mental and physical performance; an increase in the incidence of many chronic diseases; an increase in the number of fatal auto accidents; reduced mortality; and, according to a recent RAND Europe analysis, a cost to American business of $411 billion a year.

Dr. James B. Maas, the CEO of Sleep for Success, a Fort Worth, TX–based consultancy, believes that as much as 70% of the population isn’t sleeping well at least two to three nights a week, with serious consequences.

“Without adequate sleep, people are irritable, unable or unwilling to engage in an exercise program, and aren’t functioning well in the workplace,” he says.

“Even if you’re exercising and eating well, you aren’t going to be able to perform at your best,” he adds. “If people don’t value sleep, then they won’t get enough, and there are numerous deleterious effects from lack of sleep.”

Maas is also a professor and past chairperson of the psychology department at Cornell University, in Ithaca, New York, and the author of Power Sleep, a New York Times bestseller. His firm’s clients include Google, Apple, IBM, and NBC.

The Three Pillars of Success

When it comes to healthy lifestyles, sleep deprivation means that one of the three pillars is simply missing.

The National Sleep Foundation, in Washington, D.C., concurs. “Though diet and exercise are critical components of healthy lifestyles,” it observes, “it’s also important to remember that sleep is inherently linked with how we eat (and how much), how we exercise (and whether or not we lose weight), and how we function on a daily basis.”

In her keynote address at IHRSA 2015 in Los Angeles, Arianna Huffington, the cofounder of the Huffington Post, suggested that people can sleep their way to increased productivity and happiness and smarter decision-making.

“Taking care of ourselves begins with sleep,” she said. She encouraged her audience to “discover the power of sleep,” and has since continued to press the point, powerfully and in detail, with a bestselling book, The Sleep Revolution.

“Though diet and exercise are critical components of healthy lifestyles, it’s also important to remember that sleep is inherently linked with how we eat (and how much), how we exercise (and whether or not we lose weight), and how we function on a daily basis.”

Waking Up About Sleep

There are examples of all of these groups introducing nap pods—small, personal enclosures that facilitate a quick 40 winks. Virgin Active, the U.K.-based chain, has nap pod areas in some of its facilities. And, recently, David Lloyd Leisure, another U.K. brand, introduced “Nap-ercise” classes at its facility in Sidcup, a district of London, on a trial basis.

The chain was prompted to introduce the offering after its research revealed that 86% of the parents among its members often felt “fatigued.”

The class takes place in a room featuring individual beds, blankets, eye masks, “atmospheric” sounds, a temperature set at an “ideal” level for sleeping, and involves 15 minutes of gentle stretching, followed by 45 minutes of napping.

A number of IHRSA clubs—such as Avenu Fitness, Healthtrax Fitness and Wellness, and the PRO Sports Club—also are addressing the importance of sleep, in most cases with comprehensive programs that give equal weight to all three pillars of a healthy lifestyle.

At Avenu, high-quality sleep is clearly a top-of-mind concern, ranking, in Gallagher’s view, as important as regular exercise and proper nutrition.

“Sleep is addressed the first moment someone walks into the club, or during their initial contact with a trainer,” he says.

The process gets going with two onboarding sessions, a functional movement screen (FMS), and a lifestyle session that addresses sleep, nutrition, stress, etc.

Trainers, Gallagher explains, discuss the critical role that a good night’s sleep plays in developing and maintaining a healthy, well-balanced lifestyle, and encourage their clients to get more of it, even if it’s just, say, an additional 10 minutes a night.

“Trainers assist members by addressing such things as bedroom routines and sleep preparation,” says Gallagher. “They also provide simple and basic advice on how to control the bedroom environment and cue the body to fall asleep. They may even suggest using white noise apps to promote peaceful, uninterrupted sleep.”

Avenu is equally proactive and pragmatic in dealing with the other two principal pillars: exercise and nutrition.

The club counters the most common excuse for not working out—“I don’t have time to exercise”—by limiting training sessions to 30 minutes each. And, when it comes to food, it offers a number of initiatives to help members make a “better” choice when considering menu options.

The club has a basic kitchen, and Gallagher regularly brings in dietitians and other experts to give cooking classes, demos, and talks to members and staff. Local small farmers also participate, sharing their stories, and making their homegrown produce available for order, with direct delivery to the club. In addition, he holds “pop-up” dinners at the club for members, who are encouraged to invite family and friends to attend.

Gallagher’s convinced that much of the club’s success with its clientele can be attributed to the fact that his staff “eats, sleeps, and breathes” Avenu’s philosophy. 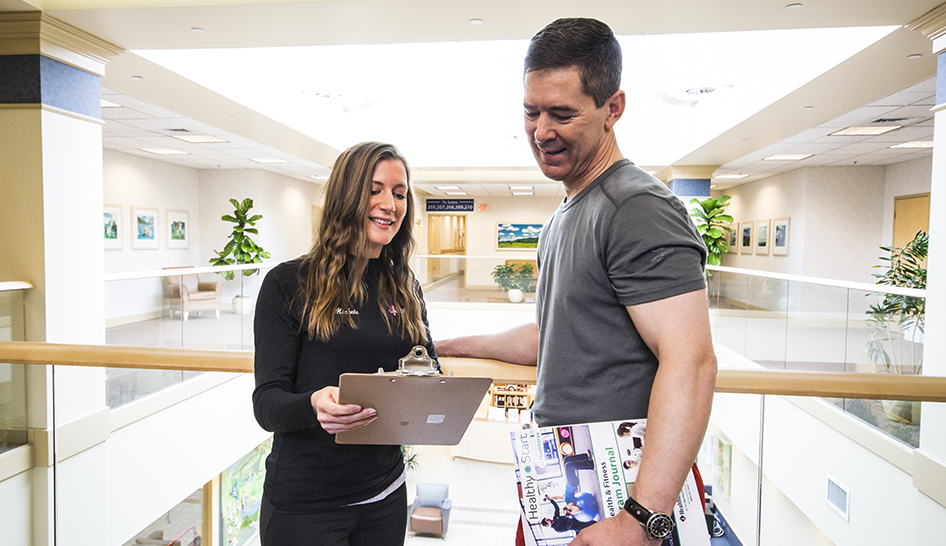 Like Avenu, Healthtrax, an 18-facility chain based in Newington, CT, gets the lifestyle conversation going immediately, as soon as a member joins a club, with its Healthy Start Program.

“We provide a free body-composition analysis using the InBody570 unit,” says General Manager Jason O’Tash. “Then our certified personal trainers use the results of that screening to interact with members, asking how they’re eating and sleeping, and how they think their plan for a healthy lifestyle should unfold.”

O’Tash acknowledges that, while many fitness professionals may not be qualified to provide nutritional counseling or treat sleep disorders, they can discuss the importance of eating well and getting a good night’s rest.

“We’re able to suggest some general guidelines for nutrition, and to encourage good sleep habits,” he says.

Trainers also may elect to take the next step, becoming a certified health coach, which makes it possible for them to address habits and behavioral factors, such as sleep, inactivity, stress, and smoking.

In 2014, a number of Healthtrax sites introduced Personal Health Coaching, a pilot program that provides members with the foundation they need to discover their “best self.” The coaches tackle a holistic group of issues, including nutrition, how to exercise smarter, unhealthy habits, and emotional health, with the latter encompassing sleep, life balance, and stress management.

The PRO Sports Club, in Bellevue, WA, employs a sophisticated and eclectic approach to construct the three pillars of a healthy lifestyle for its clients. It works directly with physicians, and many of the people taking part in its 20/20 weight management program are referred by their primary care providers, reports Erika DeRooy, the club’s dietitian services manager.

When a person enrolls in the 20/20 program, they automatically become a member of PRO Sports. A physician, a lifestyle coach, a personal trainer, and a dietitian follow their progress.

The first 12-week phase of the program focuses on behavior change and weight loss, followed by 12 weeks of maintenance and accountability, which DeRooy refers to as “a transition to self-sustainability.”

“In the maintenance piece, the health coach and dietitian help the member to avoid emotional eating, to separate food from emotion, and to address their need for adequate sleep and managing stress,” says DeRooy, a registered dietitian. The member continues, during that period, to work with the trainer, and the physician intervenes when it’s deemed necessary.

“Addressing the member’s behavior and habits, including sleep, is essential to success,” says DeRooy, “which we define as a healthy lifestyle that a person can maintain.”