This article appeared in the print edition of Club Business International in July 2018.

The IHRSA Global 25: How 3 Businesses Soared to New Heights

Explosive growth can make or break your company—unless you prepare for it, as these three successful franchisors have.

Many entrepreneurs have dreamed of building an empire quickly.

Yet, according to a 2015 study by the Kauffman Foundation and Inc. magazine, two-thirds of the fastest-growing companies fail. Among the reasons: a micro-focus on sales, cultural issues, or an infrastructure that’s not geared for sudden growth.

However, as demonstrated by Anytime Fitness, Orangetheory Fitness, and UFC Gym—two IHRSA Global 25 regulars and an up-and-coming contender—a well-thought-out, disciplined strategy positioned them to expand in short order successfully. Here’s what each company has done to manage that growth and stay healthy. 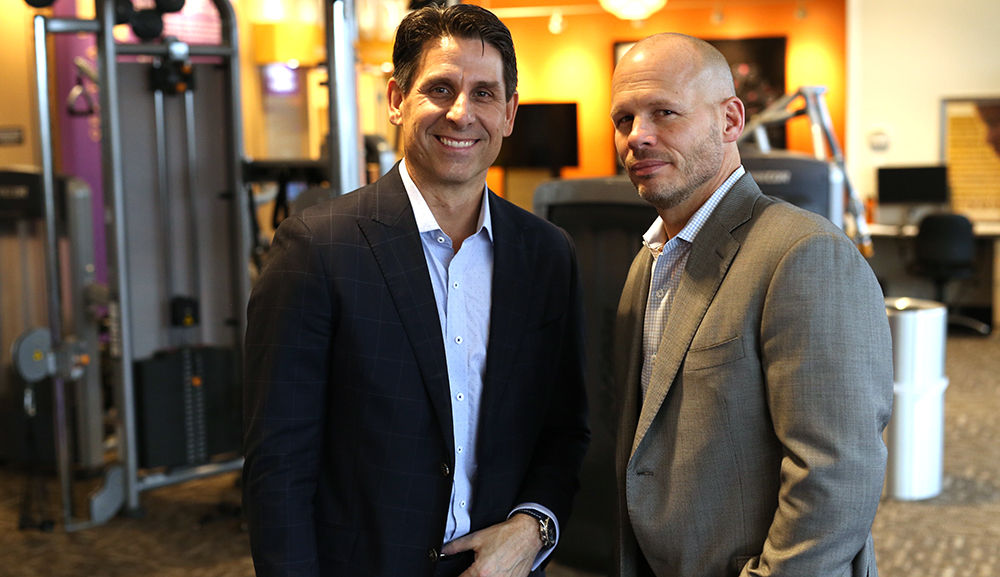 Anytime Fitness has come a long way since it made its debut in 2002. The company, which most recently sold master franchise rights in Morocco, now has a presence on six continents and in 32 countries, and serves some 3.3 million members.

It’s now laying plans to open a location in, of all places, Antarctica.

The company also achieved a major milestone this year, opening its 4,000th unit, this one in Shanghai, China.

One of the groundbreaking, 24-hour, health club franchisors, Anytime opened nine clubs in 2003, its first full year, and 47 in 2004. The number of units continued to double each year until 2007, which National Media Director Mark Daly calls “the magic year.”

“That was our fifth year of franchising, and we opened 307 gyms,” he recalls. “It marked the first of 10 consecutive years in which Anytime Fitness was, according to IHRSA’s data, the fastest-growing club chain in the world. We averaged more than 300 openings annually between 2007 and 2017, and, last year, hit 418.

“We anticipate opening 400 or more a year for the foreseeable future.”

Anticipating Success with a Rock-Solid Plan

Seeing their unit numbers double so quickly demonstrated to founders Chuck Runyon and Dave Mortensen that they had a rock-solid proof-of-concept.

“Chuck and Dave had been anticipating success since we opened, which requires some vision,” says Daly. “They didn’t wait until we had that explosive year of 307 clubs. They’d begun making key moves the previous year, when we opened 153 clubs.”

To set the stage for the future, the two made several significant infrastructure and staff changes.

In 2006, Anytime’s 50 employees were capable of supporting about 1,000 franchisees. Anticipating continued growth, Runyon and Mortensen moved their headquarters from St. Paul to Hastings, MN, quintupling their space. They also brought on new team members to strengthen their franchisee support, technological advancements, and programming, bringing their total staff to around 100. Then in early 2016, the company moved to new, even larger corporate headquarters in Woodbury, MN, to accommodate its nearly 300 employees.

Sustaining the Pace Through Growth Spurt

In the mid-2000s, which Runyon refers to as Anytime’s “teenage years,” the company’s high-volume/low-priced (HVLP) business model was still fairly novel. At that point, its 4,000-square-foot facilities needed only about 600 members to be profitable.

“Back then, it was easy for the owners and their staff to get to know their members on a personal basis,” says Daly. “So, our mantra—what our franchise consultants would coach our franchisees to do—was to operate gyms that were convenient, affordable, and friendly. Early on, we relied on those principles to sustain our growth. However, recently, given dramatically increased competition from lower-priced gyms and studios, Chuck and Dave realized that Anytime Fitness had to evolve or die.”

To stay at the forefront, Anytime introduced upgrades that focus primarily on technology and programming. They include a free Anytime Fitness mobile app for members that Daly describes as “a personal trainer in your pocket.” The app offers more than 1,000 different workout pro- grams, and provides performance and goal data; meal and activity tracking; and a locator that helps members who are traveling find an Anytime club they can use at no additional cost.

“On the programming side, we’ve always offered personal training,” says Daly, “but we discovered that it can be either intimidating or too expensive for some members. So, over the past two years, we’ve begun to offer a wide range of small-group training classes at most of our clubs.

Orangetheory Fitness Took Time to Get It Right 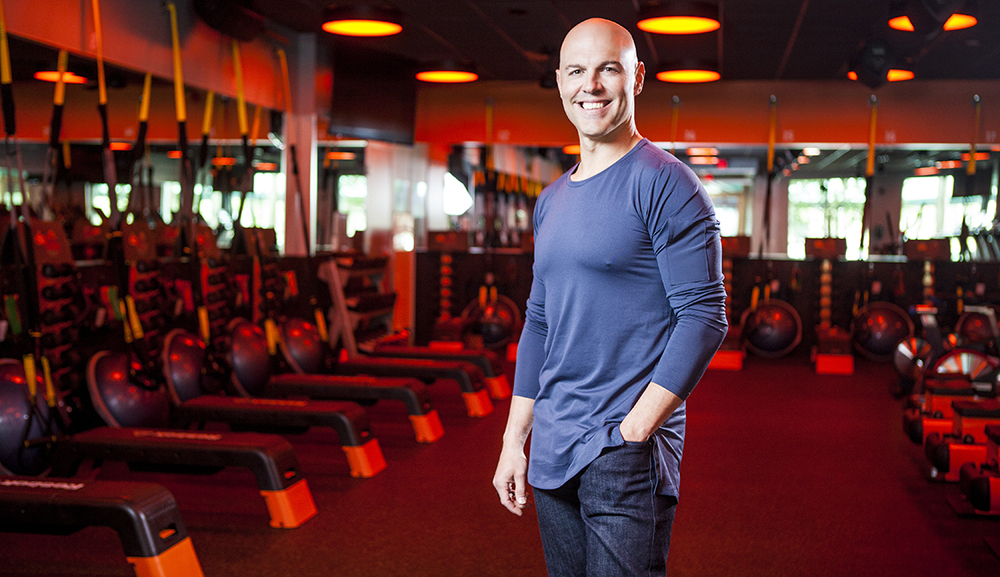 When the first Orangetheory studio appeared on the scene in 2010, its business model was a work in progress. It claimed that it offered “the best one-hour workout in the country”—a unique regimen predicated, it said, on the science of Excess Post-Exercise Oxygen Consumption (EPOC).

“For the first couple of years, we focused on our pilot,” says CEO Dave Long. “We were very raw in terms of systems and marketing, and we were bootstrapping everything. The core of the product existed, and we knew that people loved it, but we were only about 80% of the way there.”

By 2012, Long says, management had perfected its training systems, and was able to spend more time on-site with franchisees. “That’s just one of the steps we took to make the product—and our ability to deliver it—more consistent across the spectrum. We knew that, once we got that right, we’d take off.”

In 2013, Long and Orangetheory saw the growth trajectory snap upwards. While it had opened 20 locations in 2012, it managed to welcome in approximately 50 in 2013. The first truly explosive year was 2017, which saw the launch of 294 new units.

Now, with nearly 1,000 studios in 49 states and 17 countries, the company expects to continue growing at a similarly brisk pace, primarily in California and Texas.

Last year, Orangetheory had system-wide revenues of $739 million, and this year, it confidently expects to hit $1 billion.

Remarkably, not one location has closed since the brand’s inception.

Looking back, Long reflects, “You’re never really prepared for the things that really fast growth brings. But, because of the time we spent getting everything right with our pilot, and with our early franchised facilities, we were really dialed into our systems. We invested in our structure in advance, and were disciplined about developing strong field training teams, and a good support structure at our corporate headquarters.”

One modification, in particular, has made it easier to manage large rollouts.

Orangetheory now has an area developer in every market it enters. The developer, in fact, is a team that helps franchisees with new studio openings and ongoing support, which encompasses everything from marketing, to training, to compliance issues. The teams are supplemented by a robust e-learning platform, which contains modules defining and describing every position in the club.

“The area developers are our ‘feet on the street,’ ” Long says. “These coordinated field teams make large-scale openings much easier.”

Long also attributes the company’s ability to continue growing quickly to what he calls “a relentless focus on operational excellence,” and a strong focus on real estate development.

“We have a very large real estate team that works with every conceivable global market,” he says. “If there’s a trade area out there that’s viable for an Orangetheory club, and someone wants to open it—we’ll be there. We’re very serious about getting ahead of the real estate curve for our current and future franchisees. This year, for example, we sent 15 people to the RECon Global Retail Real Estate Convention in Las Vegas, and took three to four meetings a day with brokers, landlords, and owners.

“That’s how important it is for us to make sure we don’t miss out on a single location!”

For UFC Gym, the Moment Is Now

As the first major brand extension of the Ultimate Fighting Championship (UFC), a leader in the sport of mixed martial arts (MMA), UFC Gym was a unique proposition on the day it was born, in 2009.

It also was auspiciously positioned given that its partner in the launch was New Evolution Ventures (NeV), the Lafayette, CA–based venture capital firm that’s headed by Mark Mastrov, the founder of 24 Hour Fitness. NeV has a number of club brands in its portfolio.

Each, however, has similar UFC touches. The Signature and Core clubs have the trademark Octagon fighting ring; and all three offer popular programming, such as boxing, kickboxing, Brazilian jiu jitsu, and MATRX (UFC’s MMA/TRX hybrid).

As for UFC Gym’s explosive growth—that moment is now.

The firm already has 150 units open—20 are corporately owned, and the remainder are franchised—and more than 600 under agreement. UFC Gym President Adam Sedlack anticipates that number will be closer to 1,000 by the end of this year.

The company’s grand ambitions and fast gait are reflected by the fact that it recently signed a deal to open 107 units in the U.K., and another 100 units in India.

For one, UFC does have those three versatile club models. For another, it’s developed a proprietary North Star operating system, as well as operating processes that can be replicated. “And the $4.2-billion acquisition of Zuffa, UFC’s corporate parent, in 2016 by an investment group led by William Morris Endeavor (WME-IMG), has certainly helped on the media and awareness side,” Sedlack points out. 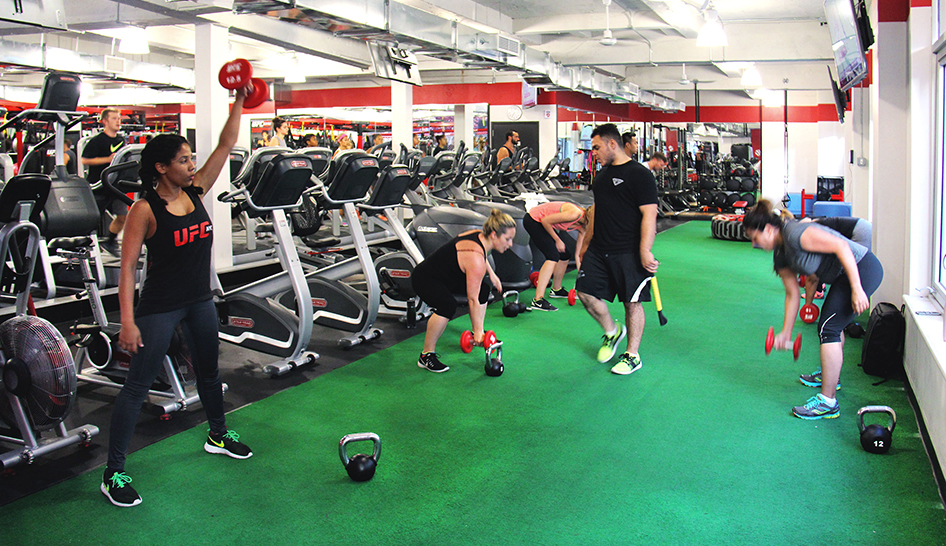 A UFC gym in NYC.

However, Sedlack notes, it’s the company’s strategic partnerships that have really helped drive its growth.

“In addition, we recently signed a new marketing agency to leverage all of the dynamics of social marketing, keyword strategy, traditional marketing, event marketing, and more,” says Sedlack. “We work hard to push the metrics of franchisee and customer acquisition, so having the right partner in any area is critical.” Another strategic partnership helps grow the brand in a different way.

“We have what we call Managed Service Agreements, or MSAs, with athletes to open UFC Gyms in their names,” he says. “We just opened a club with Alex Rodriguez, in Kendall, FL; and UFC stars Frankie Edgar and B.J. Penn have UFC Gyms in, respectively, Brunswick, NJ, and Honolulu, HI.”

Beyond operations and branding, UFC Gym aligns itself with the best program builders. Recently, for example, when shopping the competition, it learned that Brazilian jiu jitsu was growing in popularity. So, UFC contracted Maurício “Tinguinha” Mariano, a fifth-degree blackbelt who’s one of the most respected instructors in the world, to develop its Brazilian jiu jitsu programming.

“We’ve put a lot of effort into these agreements across the board,” Sedlack acknowledges. “At the end of the day, we do it all for our most important partners—our franchisees and our members.”