Bay State native, Dolly Bicknell, will participate in her 33rd Pan Mass Challenge and help bring in thousands of dollars to the Dana-Farber Cancer Institute in Boston.

For 32 years in a row, Dolly Bicknell has been riding the 192 miles through Massachusetts for the Pan Mass Challenge (PMC), one of the most successful athletic charity fundraisers in the nation.

Bicknell, a Bay State native and New England Tennis Hall of Famer, not only rides to achieve another amazing feat, but to help raise funds for a cause close to her, her family, and her community. 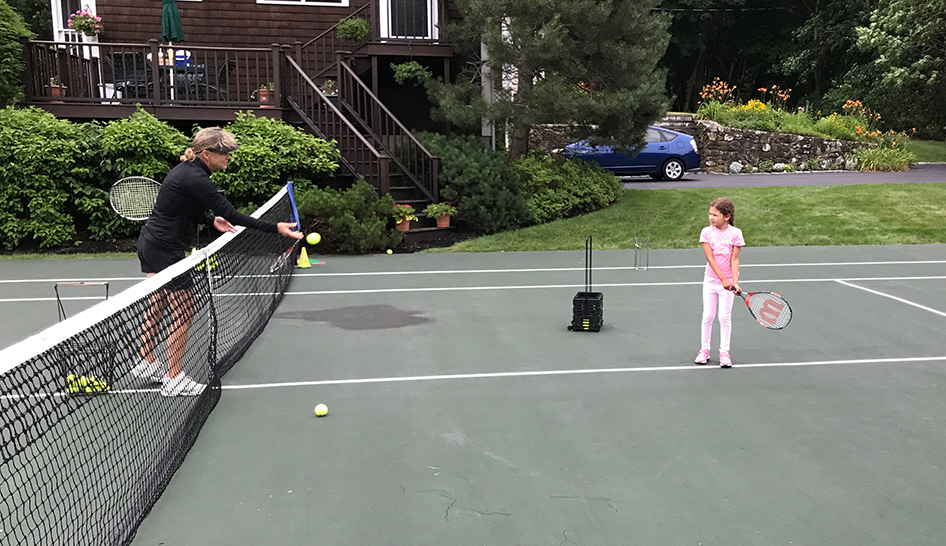 Dolly Bicknell on the tennis court.

The event, which takes place this year August 4-5, helps raise money for the Dana-Farber Cancer Institute in Boston and first attracted Bicknell and her husband, Len, just for the mere challenge of the ride.

“The first few years that my husband and I participated, we did it for the challenge,” said Dolly. “Then when my father-in-law was diagnosed with inoperable prostate cancer, the ride took on a whole new meaning.”

Len’s father passed away in 1989. But cancer wasn’t done affecting their lives. Nearly 20 years ago, Dolly was diagnosed with melanoma.

“I teach tennis, and I’m out in the sun a lot. I try to be careful, but there’s only so much you can do,” she said. “I was very lucky. It was dealt with quickly.”

The experience only deepened her commitment to the cause. “I have over 200 people that I’m either riding in memory of, or in honor of; people who have survived, people who are still fighting, or people who didn't make it. And it’s pretty emotional. The whole ride is emotional. Everybody's been touched by cancer.”

Combining Passion for Both Tennis and Community

Bicknell knows how to rise to a challenge. Since she was 11 years old, she’s been playing competitive tennis and has spent decades at the top of the state in singles and doubles. In 2012, she was inducted into the New England Tennis Hall of Fame.

She’s been teaching a wide range of players since 1969 and found a way to give back in an even bigger way through the PMC.

“If you take lessons from me, I keep track, then at the end of the summer, I give you a bill. Then I ask that you make the check out to the PMC Jimmy Fund,” she said. The Jimmy Fund Clinic is the pediatric cancer section of the institute.

Her billing preference is a surprise to some clients, but a happy one. “You get the tax deduction, so it’s win-win,” she said. “And people often give me more than what I've asked for, because it all goes to cure cancer.”

PMC Brings Cyclists Together for Cause

Last year, the PMC, with over 6,200 participating cyclists, raised $51 million for the institute, bringing their total since the 1980 inception to $598 million.

“There are always incredible memories from a PMC weekend,” Bicknell said. “One I’ll never forget occurred many years ago after a particularly difficult stretch of hills. I was selfishly thinking about how tired I was, when I came upon a family of five standing by the road applauding the riders. As I biked by, I smiled and breathlessly said, ‘Thank you.’ They called back, ‘No! Thank you! Thank you!’ I was totally surprised and teary, realizing that Dana-Farber had probably helped one of them, or someone close to them.”

“I have over 200 people that I’m either riding in memory of, or in honor of; people who have survived, people who are still fighting, or people who didn't make it. And it’s pretty emotional.”

Lear more about the event, which offers 12 routes from beginner to advanced and goes through 46 different towns, at the PMC website.