Equinox and SoulCycle are doubling down on their “market-defining talent” by creating a talent management agency, ClassPass has secured more funding and plans to release a new app, and let’s not forget the PHIT Act, which made history and passed a major hurdle on Capitol Hill.

WBUR Boston examines how the influx of functional fitness routines are changing the gym floor—and not for better, according to one expert. To make space for functional workouts that use body-weight exercises or free weights, some gyms are making the decision to ditch fixed-weight machines. But Wayne Westcott, a professor of exercise science at Quincy College, says it would be a mistake to have a workout space with no machines. "Any machine that moves a muscle to its full range, with an appropriate strength curve, with appropriate resistance, is the best possible way to condition that muscle, to make it stronger," he said. As IHRSA pointed out before, weight machines have a valuable role in fitness routines ranging from beginners to pros.

Read more about the debate over weight machines.

Gold’s Gym May Soon Be Up for Sale

Amid a shift in strategy within Gold’s Gym, its majority shareholder, TRT Holdings, Inc., is considering putting the chain up for sale. According to a press release, TRT Holdings plans to focus more on its core business that includes Omni Hotels & Resorts, and other public and private investments. Gold’s Gym CEO Brandon Bean, who was recently interviewed by CBI, said of the possible sale, “The popularity and growth of the Gold's Gym brand is at an all-time high, and we're excited to work with a new ownership group to continue this momentum across all our key business units, including our company-owned gyms, domestic and international franchising operations and global licensing program."

Read more about the possible sale.

PHIT Passed in the House! Now What?

The IHRSA-supported PHIT Act passed the U.S. House of Representatives on July 25. As PHIT heads to the Senate for consideration, we are asking for your support by sending a letter to your senator. This is the furthest the bill has gone in Congress since it was thought up 14 years ago. With some changes to the original bill, and the possibility of more to come, there’s still more work to be done, said Helen Durkin, IHRSA’s executive vice president of public policy. She added, “While our work on PHIT is not finished, we’d like to take today to thank every individual and organization that has supported healthy lifestyles by speaking up in favor of the benefits that PHIT would provide to our citizens and our nation.”

Read more about what you can do to #PassPHIT.

How Anytime Fitness Is Taking Over the World

Entrepreneur Magazine asked Chuck Runyon how he plans to make his ambitious global growth plan work. The Anytime Fitness CEO and co-founder plans to open 400 new locations, mostly in international cities, even after celebrating his 4,000th opening. We learned in a recent CBI article how he helped set the foundation for the company’s success, and how he believes leadership is the key to a healthy and thriving workplace. But now we get a glimpse into Runyon’s global plan. “It doesn’t matter if you’re in China or Australia or Europe—people want to look and feel their best, and they aspire to entrepreneurship. We can empower entrepreneurs around the world,” he told the magazine.

Orangetheory Fitness just celebrated its 1,000th studio grand opening in Portland, OR, the company announced in a press release. At the new studio, which is the third in Portland, CEO Dave Long said, "With today's Portland grand opening taking us to 1,000 studios, we're well on our way to our goal of operating 2,500 studios—serving 2.5 million members—by 2020." Orangetheory Fitness’ 1,000 studios are located in 49 states and 18 countries, which all opened within the last eight years, making it one of the fastest growing franchise companies, the press release said. Long credits the company’s ability to fuel growth to a strategy focused on real estate development and dedication to “operational excellence,” he said in a CBI interview.

Read more about the grand opening. 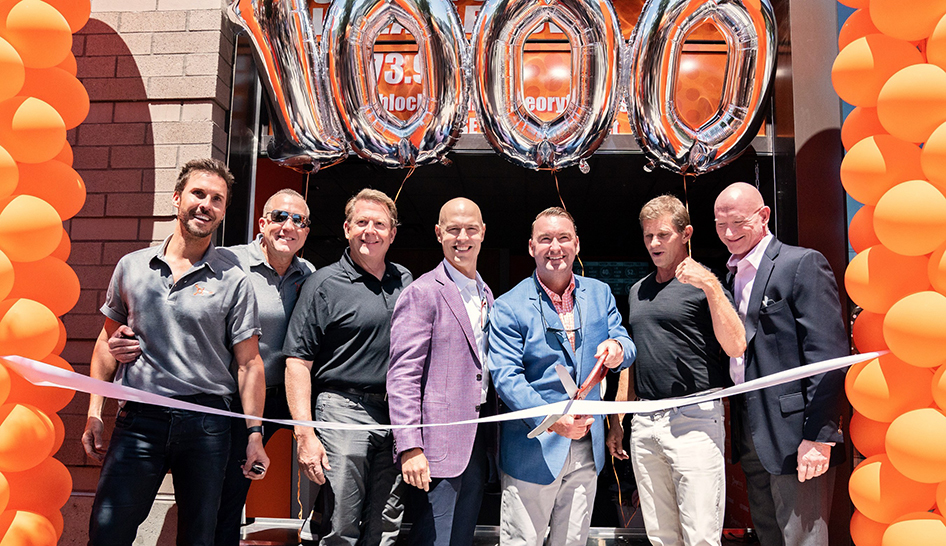 Health club operators know that popular fitness instructors can attract a cult-like following (who may follow the instructor if they leave your club). Maybe that’s why Equinox and SoulCycle are helping their top personalities make it to the next level. The two influential industry leaders have announced a plan to create a talent management agency comprising of Equinox and SoulCycle employees, many of whom are already break-out stars on social media. The agency, supported with advisory from global talent powerhouse WME, will work to empower employees and offer resources to maximize their potential, a press release said. “We are now poised to offer our star employees an exclusive, monumental opportunity. With our support, guidance and representation, our top talent can meaningfully grow their personal brands, develop key partnerships and ultimately generate additional income,” said Harvey Spevak of Equinox. This initiative hopes to provide the tools and skills for employees to build their own brand in the digital space and elsewhere.

Read more about the initiative.

In two major moves, the startup has announced a new venture into audio by releasing a free app offering audio workout tracks, all while securing $225 million in venture capital. The funding will allow ClassPass to expand into 10 more cities in the U.S. and into 20 more countries by 2019. “Our ambitions have always been more lofty,” said founder Payal Kadakia to the New York Post. And by diversifying its offerings, ClassPass Go makes the service more accessible to people living in areas where fitness studios may not be as prolific. Daval Chadha, the senior product manager, said in a CNBC report, “We want this to be a product that's not just being used in big cities but also smaller towns and even globally.”