Hot off the presses, right to your screens, IHRSA’s efforts to spread the news about what health clubs are doing and going through are picking up steam.

Since lockdowns began in the U.S. in mid-March, IHRSA has been working to communicate three major PR messages: clubs are hurting, clubs are safe, and clubs–and exercise–are essential.

We aren’t directing this message to the industry or consumers. This message is explicitly for political and policy media to reach lawmakers for two important reasons:

We have been communicating since April that clubs are safe, clean, and well-prepared. Thanks in part to that message, President Trump included gyms in Phase 1 of his opening plan. You would not believe the tornado that hit my in-box the day this CNN article hit.

“Their inclusion follows a last-minute lobbying push by an industry not known for flexing its muscles in Washington. While not every major company was part of the effort, conversations with 10 leaders in the fitness-club business reveal an influential network of relationships that kicked into gear over the past few weeks and helped move gyms to the front of the line -- even to the surprise of many in the industry.”

We’ve directed most of our media outreach on how badly the industry is hurting to Capitol Hill and policy media, like this news release, “Congress Must Act to Save Hundreds of Thousands of Fitness Jobs.”

An exception is this article, featured in Mediaplanet’s FUTURE OF WORK campaign—which through print and online distribution from USA Today, will reach an estimated 18.3 million consumers.

The next equally important effort is to show how clean and well-prepared clubs are to open and keep their members and staff safe. This message has dual targets; first is governments, to allow clubs to open—and now remain open—and second is consumers.

Clubs Are Safe Message to Government

The message that clubs are clean and well-prepared, along with IHRSA's four-prong safety framework, was sent repeatedly to the federal government, all 50 U.S. governors, and local and county health boards. The exception being Alabama, which opened clubs in their Phase 1 without the need for us to advocate.

Then, when COVID-19 cases started to rise, and states began reclosing health clubs and gyms, IHRSA and 60+ fitness industry leaders once again sent a letter to all 50 governors explaining how “gyms are not causing the spread." While we sent the letter to governors, consumer media thankfully picked up the message and ran with it. Industry leaders appeared to speak about the letter on The Today Show, Cheddar, and on Fox Business' Neil Cavuto and Varney & Co. 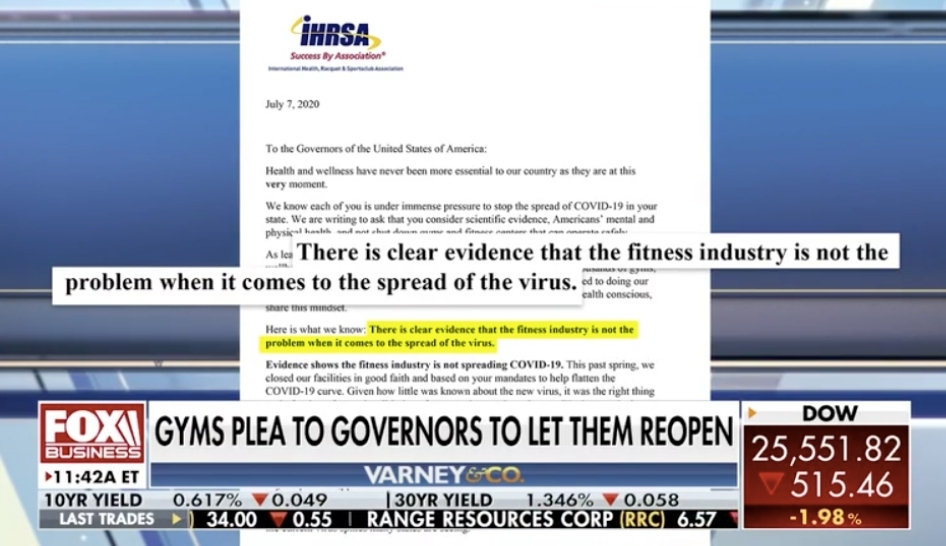 In addition to the above media hits, we've been working to explicitly show consumers how clean, safe, and well-prepared clubs are to open.

For instance, this article promotes all the amazing ways gyms are ramping up cleaning protocols to welcome back members. In its first 24 hours, it was picked up by 111 media sites, including Yahoo Finance, with a potential audience of 41,088,892.

Then, we were all thrilled to see the significant new research out of Oslo, which I combined with great data on contact tracing and check-ins to write "Research Shows Health Clubs Are Safer Than You Think." My intent is for clubs to share this research with their members and in their local media markets.

Here's an example of how Life Time Fitness shared the article with its members. 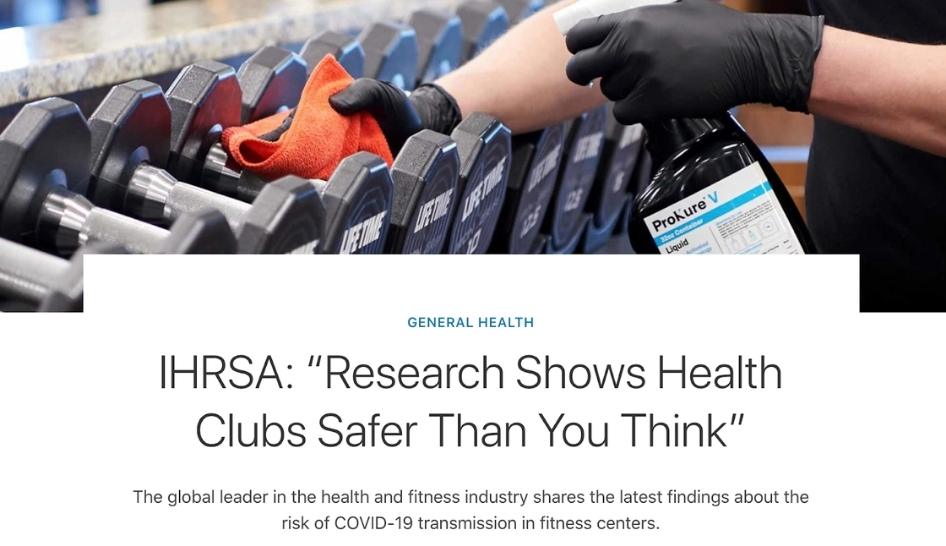 While the above messages are critical, there's perhaps an overarching message that supersedes them all.

Had the world recognized the value of our industry years ago, we would have fared better against the disease, and clubs—like physical therapists—would have stayed open. This third message is ongoing, but a great example is that Dr. Oz partnered with IHRSA to showcase the benefits of exercise and getting healthy. Steve Forbes included a post about the partnership and Dr. Oz's message to the vulnerable.

Finally, there’s the terrific and clever rebuttal CBI’s Jim Schmaltz wrote to counter the illogical Time.com article that insinuates Americans turning against gyms would be good for the nation’s health.

So, where do we go from here? IHRSA will keep working nonstop to spread these three vital messages, and you can help. We encourage you to share the articles I’ve linked to on your social media accounts, and with friends and family.

As IHRSA's Vice President of Communications and Leadership Engagement, Meredith works to grow, promote, and protect the global fitness industry through media, policy, and advocacy. Meredith seeks to raise awareness of and funding for important policy issues affecting the fitness industry, while encouraging leadership, engagement and collaboration. When not protecting or promoting the fitness industry, she is either playing tennis or trying to get her stubborn 5-year-old English Bulldog to take a walk.