This article appeared in the print edition of Club Business International in June 2018.

Health clubs continue to make more and better use of “the cloud” every day by connecting to a range of equipment, encouraging member interactivity, and gathering important data.

By taking advantage of cloud technology, clubs can gather data that’s vital to asset management, determine the popularity of gym equipment, and weave in members use of popular third-party apps and wearables.

Because the value of the cloud rests with its ability to gather, assemble, and most importantly, utilize data to deliver real outcomes, equipment manufacturers—among them, major players like Precor, Technogym, and Life Fitness—have been spurring innovation and will continue to do so in the future.

Here’s a wrap-up of what these three leaders are offering clubs now.

Platforms and Partnerships in Fitness Technology

For example, Technogym’s mywellness cloud has some 14,000 connected fitness and wellness facilities around the world, with more than 10 million users.

Precor, through its Preva consoles, uploads data from some 500,000 workouts a day from 80,000 networked machines in 92 countries to its proprietary Preva cloud.

Life Fitness, which only recently introduced its Halo Fitness Cloud, has some 2 million users on its equipment at any given time.

Over time, both Precor’s Preva and Technogym’s mywellness platforms have become increasingly powerful, and Halo is coming out of the gate with impressive clout.

The secret, in each case, is an “open platform,” which allows the seamless integration with third-party application and platform providers. Such partnerships can extend a manufacturer’s capabilities exponentially, offering access to a wide range of complementary functions.

Since introducing the Preva platform in 2010, Precor has been creating partnerships, and took it a step further by making its platform open in 2013. Then in 2017, the company created a formal developers’ program to provide its partners with documentation, sample program coding, and a dedicated support team in North America, Asia-Pacific, and Europe.

Now, the company has more than 25 partners in various stages of integration, covering a range of functions from front-desk operations and cardio training systems, to game and rewards system development.

“Our goal is to work with best-in-class developers to create and deliver a broad selection of functions that each club can use to customize their cardio consoles to deliver the right services, at the right time, for their members and staffers,” says Jeff Bartee, principle product manager, software and services, at Precor.

Technogym’s mywellness cloud, which debuted in 2012, also features a plethora of partner apps and platforms spanning fitness and club management.

Third-party integrations include 50 club management platforms, such as ABC Financial, Exerp, and Gladstone, as well as more than 30 health-tracking apps.

On the member side, these partnerships are, in large part, designed to enable members to set goals and gather data on their workouts whether they’re inside the club on Technogym equipment, or completing a workout anywhere else.

“Our partnerships work to make members’ personal health and workout data—stored in real time—available on Technogym equipment as well as across multiple other platforms,” says Enrico Manaresi, Technogym’s PR and media relations director. “For example, our proprietary MyRunning Logbook app allows members to track any of their outdoor runs using their mobile training devices and favorite apps, such as RunKeeper, MapMyFitness, Strava, Polar, and Garmin. What’s more, they can replicate those runs on any Technogym treadmill that has the Unity console.”

With its HALO Fitness Cloud—which debuted at IHRSA 2018 in March—Life Fitness took a very different tack. It created Digital Ventures Group (DVG), an entirely separate arm, to develop the platform.

The vision for the product, according to Life Fitness President Jaime Irick, is “to be the platform that connects the world to fitness.”

Jason Worthy, vice president of digital fitness solutions at Life Fitness, runs DVG, describing Halo as powerful digital technology that provides facilities with an array of tools that can be mixed and matched to make day-to-day business easier, and create more meaningful interactions with members.

“From predictive maintenance, to the ability to build customized programming based on member utilization data, goals, and participation levels, Halo is geared to yield insights that help drive operator and exerciser outcomes.”

Current partners include VirZOOM, a developer of virtual reality content and virtual sports technology; Studio, a leading audio-coaching running platform; and Apple GymKit, which works with the Apple Watch.

In addition, DVG has teamed up with TechNexus, a venture capital firm based in Chicago that specializes in early-stage and startup investments, to find, fund, and grow technology partnerships designed to create even more value for club operators.

“We have a truly open philosophy in terms of how we approach technology and build partnerships,” Worthy points out. “If you’re an operator, we won’t insist that you take everything made by Life Fitness. We want to work with new technologies and create a platform that allows them to quickly get traction in the industry. We believe that this approach will help us all succeed.” 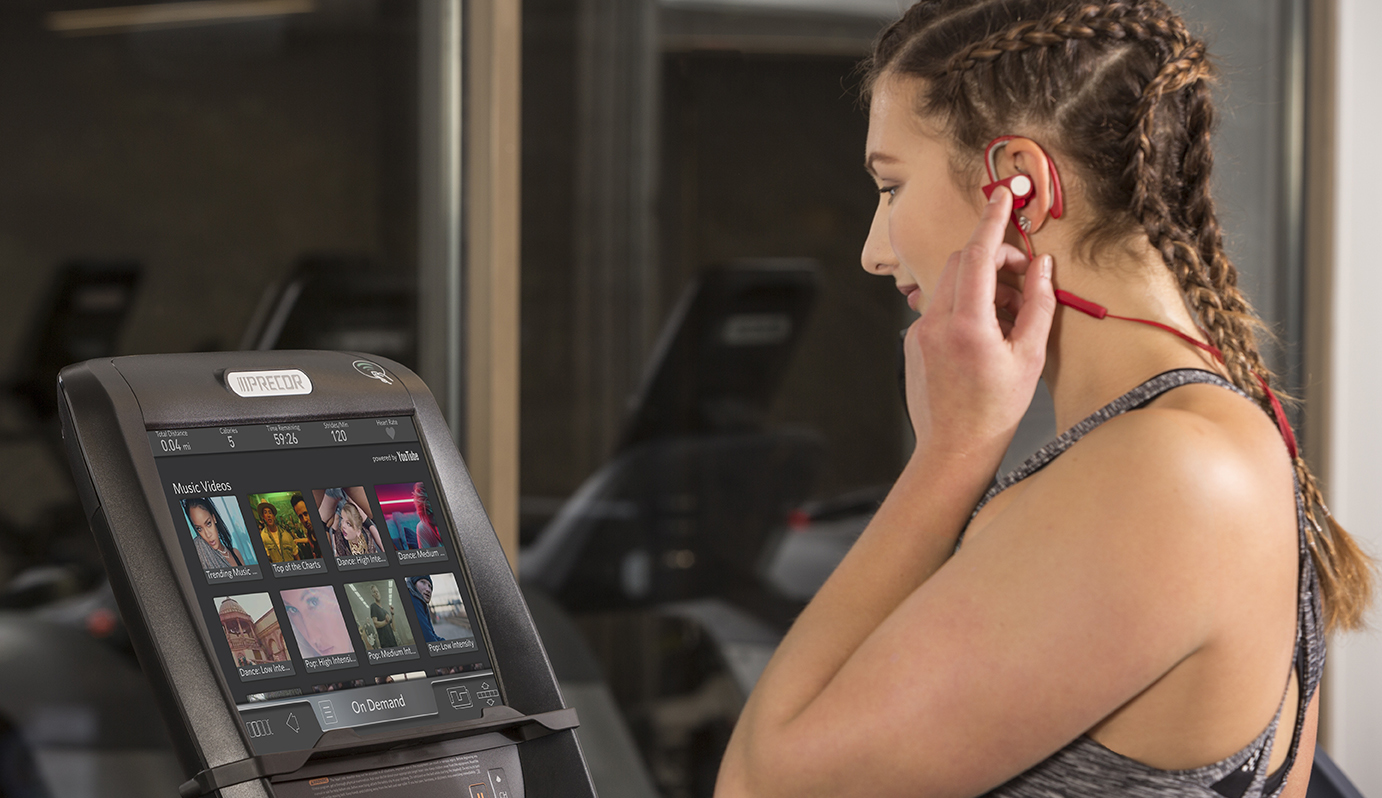 Like other manufacturers, Precor will continue to innovate as well.

Precor’s Preva will soon offer access to games, cardio training systems, rewards systems, health and wellness data aggregators, and more. And, it will do it all in a branded fashion, which, Bartee states, “will have the power to deliver a highly personalized and engaging service that reflects our clients’ brands.”

While Precor has big plans for Preva, the system is already using data to drive numerous member and operator outcomes. Taken together, notes Bartee, “that accounts for a crazy amount of data,” which includes equipment condition and usage, and member workout summaries.

Members with Preva accounts can save workouts, set weekly goals, customize their screen layouts, and more. On the facility side, the data collected by Preva has a direct impact on product development.

“Let’s say that we learn that 97% of people never run a treadmill over a certain speed or that 70% of users move most frequently between two specific elliptical crossramp elevation settings during a workout,” he says. “We can feed this data back to engineering to be used to optimize the next generation of equipment design, improving the exercise experience for the member and extending the life of our equipment.”

“We have a service called Video On Demand, where we aggregate a series of videos for entertainment and engagement—music videos, sports snippets, education videos, etc.—and we create channels that people can watch while they’re working out,” he explains. “We can then rank the videos by popularity and use that data to continually optimize the service.”

Given Technogym’s focus on offering users valuable information related to their health and wellness outcomes, the mywellness ecosystem will continue to deliver more on-demand capabilities through its combination of partner and proprietary apps.

mywellness enables members to easily track and share personal data about their physical activity and health using their favorite apps, which are integrated in the mywellness cloud; they can track their progress and performance through a personalized coaching app; and they can enjoy customized entertainment options during their workouts.

The platform also continues to ratchet up its interactive fitness quotient.

“Through mywellness and our connected equipment, members have the opportunity to mesh their indoor and outdoor activities. Through the MyRunning Logbook function, for example, they can replicate outdoor functions on indoor treadmills,” says Manaresi. “They can also create on-the-fly running competitions between other users in the gym. And it’s all personalized based on variables including their goals, heart rate, and other health factors, and existing custom programs created by trainers.” 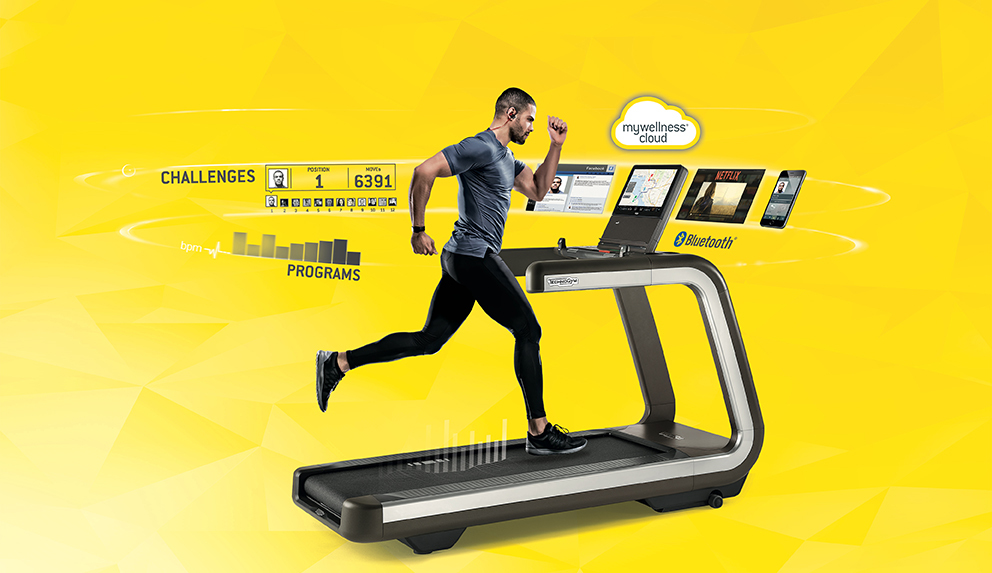 In rolling out its Halo Fitness Cloud, Life Fitness has created a wide-ranging menu of cloud service delivery options, including the Standard, Core, Train, and Engage plans.

The Standard plan offers cloud-derived insights on equipment management, service and maintenance (including preventive notification), and facility and staff updating.

In addition, with Core, clubs can add a variety of other functions, such as member profiles and the Halo Fitness app; with Train, expanded trainer program offerings and personalized workouts; and with Engage, automated club promotions and member surveys.

However, as the system gathers data, it’s the behind-the-scenes work Halo does and its associated insights that may offer the most value.

“We’ve developed several case studies that show how the data Halo harvests offers the opportunity to continuously improve outcomes for both members and clubs,” says Worthy. “For example, it enables a club to track each member’s fitness goals, and then aggregates that data anonymously. As a result, one club noticed that many of its members’ goals were tied to nutrition and healthier eating. Therefore, instead of the club only offering classes like Tabata and yoga, it began offering nutrition-based classes to help members meet their goals. This supports retention, since the operator was providing an offering specific to its population.”

Collaboration vs. Competition for New Technology

The Preva, mywellness, and Halo clouds all offer valuable benefits. But will one surpass the other two at some point?

Under the best circumstances, they’ll collaborate instead, says Ted Vickey, president and founder of FitWell, LLC, an international fitness management and design company, and member of the Fitness Industry Technology Council (FIT-C) board of directors. In his view, any cloud system should be open source and available to all, with clubs, members, and everyone else able to share data as needed.

“We want to work with new technologies and create a platform that allows them to quickly get traction in the industry. We believe that this approach will help us all succeed.”

“If the equipment suppliers offer cloud services as a selling point, then they must also offer the ability to transfer all of the data, should a club decide to switch vendors at a later date,” Vickey says. “Clubs need to provide the proper service to their members and continuously improve their operations, regardless of the vendor. As an industry, we’ve worked collaboratively before. For example, most major brands can accept the Polar heart-rate signal and display. A real cloud-based ‘health hub’ requires that type of seamlessness.”

Still, it’s safe to assume that other leading equipment manufacturers will keep a keen eye on Precor, Technogym, and Life Fitness, and explore the ways that they themselves can leverage the cloud.

So stay tuned, as many interesting new developments are definitely in the offing.