Federal Legislation That Could Change the Fitness Industry

When lawmakers start recognizing physical activity as the literal lifesaver it can be, it could mean policies with significant impact on the fitness industry—and our country.

To promote and protect health clubs, we monitor many bills. In the past year, we've talked about everything from emerging opioid regulations to new overtime rules to changes in state sales tax on gyms.

These are all issues that—at the moment—may only impact clubs in a few states. So, let's look at the country as a whole and take a moment to focus on our federal legislative efforts. Specifically, one bill could have a major impact on your health club, your community, and even your friends and family.

By now, you may have heard of the PHIT Act.

For those who haven't, the PHIT Act is the Personal Health Investment Today Act or the PHIT Act of 2019. PHIT would allow individuals to use up to $1,000 from flexible spending accounts (FSAs) or health savings accounts (HSAs) to pay for qualified sports and fitness expenses per year. For families—or households filing jointly—the amount would increase to $2,000 per year.

Why use FSAs or HSAs toward qualified sports and fitness expenses? Because exercise saves money in healthcare spending, and research shows that incentivizing exercise can get more people active. According to data, $0.71 of every dollar spent on healthcare goes to treating people with multiple chronic conditions, many of which are largely preventable with exercise and other healthy habits. If passed, PHIT could save families 20-30% on their physical activity costs. 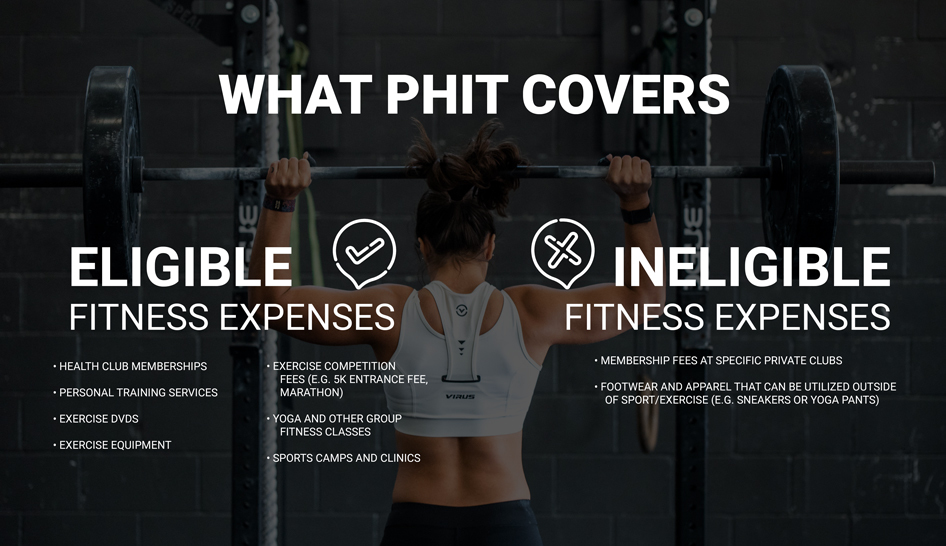 What counts as a qualified sport or fitness expense? These are expenses such as youth sports fees, fitness facility memberships, and physical activity programs. The PHIT Act would not cover items like footwear or apparel such as sneakers or yoga pants that someone could use outside of sports.

During the 115th Congress, PHIT (H.R. 6199) passed in the House by a vote of 277 to 142, but Congress came to a close before the Senate was able to vote on PHIT (S. 482). Given the bipartisan support of the bill, we were confident the bill could have passed into law.

PHIT in the 116th Congress

So, what happens now that the 116th Congress is in session? How can PHIT pass and become law? In a perfect world, PHIT could become law in five steps.

While this is the classic way for a bill to become law. It isn’t the only way.

Often, a bill like PHIT gets combined with other proposed legislation into a bigger bill. It is easier to pass larger bundled bills than a single bill in Congress these days. To get PHIT considered more quickly, we are actively seeking opportunities to bundle it into a bigger bill.

That said, we have to find the right bill to combine PHIT with, as combining bills together comes with the risk that the new bill may not be as bipartisan as PHIT. When this happens, it makes it harder to get the votes needed to pass the PHIT Act.

The good news is Rep. Ron Kind (D-WI) has re-introduced the PHIT Act (H.R. 1679) to the House of Representatives. The bill already has 73 co-sponsors, evenly split between Republicans (37) and Democrats (36). Also, Sen. John Thune (R-SD) already introduced the Senate version (S. 680), which currently has 12 co-sponsors (8 Republicans, 3 Democrats, and 1 Independent). The Senate version was read twice in March and referred to the Committee on Finance.

This bipartisan support demonstrates that exercise and health are issues that span across the aisle and political divisions.

“$0.71 of every dollar spent on healthcare goes to treating people with multiple chronic conditions, many of which are largely preventable with exercise and other healthy habits.”

On May 22, IHRSA’s Executive Vice President of Public Policy Helen Durkin joined other members of the PHIT coalition on Capitol Hill to meet with legislators. The group was able to attend more than 50 meetings with House members and continue to work toward attracting even more co-sponsors to the PHIT Act of 2019.

PHIT would help Americans who are already active save money, as well as incentivize less active folks to try physical activity with less financial risk.

What You Can Do To Pass PHIT

This month, many of your representatives and senators may be back in your district for the congressional recess. If you run into your elected officials, be sure to tell them how much value your daily workout or child's sports team adds to your family's health.

You can also schedule a meeting with your senator or representative. If you do, we put together some #PassPHIT resources at the bottom of this page you can use in your discussion.

Tell Congress you support the PHIT Act (S.680 /H.R 1679), and they should too. Then tell us how it went! Visit the PHIT website for more information and to quickly send an email to Congress voicing your support for physical activity.