Expert Strategies to Minimize Noise Pollution at Your Gym

How a health club manages sound makes, or breaks, the member experience. We asked noise experts for their best solutions.

On a Sunday morning, a loyal member appears at your front desk after fighting inclement weather to get to the club.

After checking in, she heads for her favorite treadmill, turns on the TV, plugs in her earbuds, and embarks on a vigorous workout.

But 15 minutes later, she’s back at the front desk and clearly unhappy. She’s annoyed because another member working out nearby has been slamming a medicine ball to the floor so hard that the noise has been physically jarring.

It’s a question of conflicting needs.

People who enjoy powerlifting, group X classes, or vigorous functional-training regimens should, of course, be free to engage in, and enjoy, their exercise activity of choice. But it’s a club’s responsibility to make sure they can do so without preventing other clients—ones who prefer a quiet cardio, yoga, or spa session—from doing so as well.

Creating a suitable club environment for both can be a challenge. But, as the architects, designers, and industry suppliers that Club Business International spoke to assure, their professional toolboxes are filled with solutions. 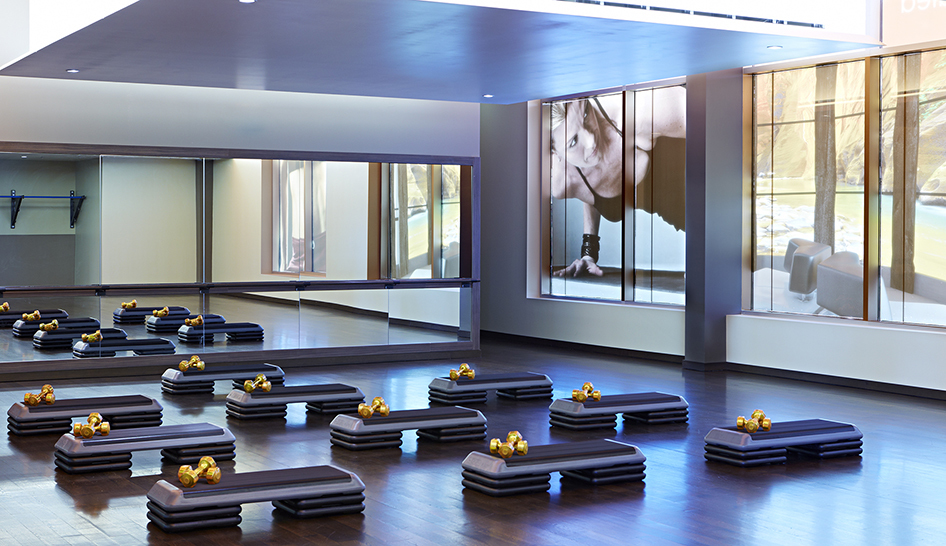 Boxes Within a Box

Like aesthetics, lighting, and air quality, sound is an integral component of the club experience. And, like them, if managed well, it complements and enhances whatever’s taking place within a given space. But if noise is ignored and left to its own devices, it can produce those critical, unpleasant moments that lead members to stop coming in, or, in extreme cases, to next-door neighbors filing lawsuits.

The subject is complex, and riddled with concepts and phrases—acoustical clouds, double-wall systems, Sound Transmission Class (STC) ratings—that, while they don’t need to be mastered, should, at least, be familiar enough for club owners to facilitate intelligent conversations with the sound experts.

The bottom-line goal, in reality, is the very definition of simplicity.

Each space requires, and deserves, its own acoustical identity.

The principal way to provide it is to create “boxes-within-a-box” when designing, constructing, and outfitting a club, explains Bryan Dunkelberger, a principal in S3 Design, Inc., based in Braintree, MA. “By that, I mean to convey that each ‘box’ has a different need. In a group X area, the objective is to trap sound in. In a yoga, spa, or Pilates area, it’s to keep sound out.”

Rudy Fabiano, the founder of Fabiano Designs, in Montclair, NJ, points out one of the many subtle issues that inevitably arise. “‘Transmission’ has to do with airborne sound leaving a space,” he says. “Think, for instance, about music leaking out of an aerobics room; however, trapped sound creates reverberation and echo. You need to shield areas from both.”

The Primacy of Programming

The factors that inform one’s ability to harness and tame sound to one’s liking include the building’s overall construction; the placement of spaces within it; walls, ceilings, and floors; details such as outlets, switches, and air vents; and various sound attenuating systems.

The process of bringing them all to bear on the noise challenge should be led by the club’s programming.

“Consider spaces that are adjacent to one another,” says Christa Plaza, a principal at Essenza Architecture, based in Louisville, CO. “When you’re starting with a blank slate, think about grouping quiet areas and exercise studios together. But, when your existing building or layout doesn’t allow for that, there are a number of different ways to proceed.”

“If noise is ignored and left to its own devices, it can produce those critical, unpleasant moments that lead members to stop coming in, or, in extreme cases, to next-door neighbors filing lawsuits.”

One common solution, she says, is a double-wall system, which consists of two framed walls with sound-insulation material filling the space between.

The goal is to produce a high Sound Transmission Class (STC) rating, which indicates an efficient reduction in sound transmission.

In a smaller space that can’t accommodate a double wall, Plaza recommends a single 6" stud wall, with 6" staggered framing—which helps create gaps that baffle sound—with insulation woven through it. In both cases, using a special type of drywall, called sound gypsum board, will produce a higher STC rating than standard gypsum.

Another possibility for tight spaces with metal studs is using two layers of drywall on both sides, with insulation in between. “Setting the bottom and top stud tracks on neoprene also helps absorb sound,” says Dunkelberger.

Electrical outlets and switches are another concern, and shouldn’t be positioned back-to-back in the same stud cavity between two spaces, says Dunkelberger. “Even though the wall may have been thickened and insulated, the sound from one room will enter the junction box, which holds the wires, and travel through the wall into the other junction box, and, then, into the adjacent room.”

Air vents are another conduit that carries sound from one point to another. “You can work with your architect or mechanical engineer to produce better sound separation through the vent,” he says. “All of these steps may seem like little things, but they can make a difference.”

There are other ways that sound leakage can occur, Fabiano points out. He describes a project that his company undertook for a club chain, which involved creating group X, group cycling, and functional-training studios—side by side. “We had to make sure that reverb and echo didn’t leak from one to the other,” he recalls, “and the sound in each room was loud, theatrical, and different.

“To make it work, we sealed the walls and ceiling. We also used special doors with bottoms that, when closed, drop into tracks and seal tightly with neoprene gaskets.”

Open areas, such as pools, common areas, weight rooms, and tennis and racquet courts, present their own challenges, since there are fewer natural wall spaces to help modify sound ... and more hard surfaces that don’t absorb noise.

Here, sound mitigation begins overhead with exposed ceilings. In such cases, Dunkelberger recommends using a spray-on insulation product such as K13, fabric-wrapped panels, or baffles—or perhaps a combination of all three—to help deaden and absorb sound.

Plaza concurs, adding, “Acoustical clouds (special panels suspended from the ceiling) or baffles also can be useful in open areas. They assist with sound attenuation and, moreover, can be colorful and creative. Wall- and ceiling-mounted acoustical panels help in spaces such as racquet courts, for example, but be sure to allow lob space for the ball when designing the hanging version.”

Perhaps the trickiest open area to soundproof is the pool, because of the hard surfaces that generate a great deal of echo and reverb. But, dipping into the sound pros’ toolboxes, one again discovers solutions.

“If you’re constructing the pool building from concrete block, using acoustical blocks can be helpful, although they’re more expensive,” says Dunkelberger. “In addition, there are specialized baffles that can be hung from the ceiling, or mounted on the walls, to help absorb sound. However, check with the manufacturer to make sure their products are suitable for high-humidity environments.”

“A room full of athletes performing various activities that involve heavy weights and fast movements can quickly become a noisy mess,” acknowledges Troy Kelley, the director of sales, for ecore Athletics, a flooring manufacturer located in Lancaster, PA. But, he’s quick to add, flooring can help clean it up.

“Employing products that absorb energy, vibration, and sound can greatly reduce the ambient noise, and create a more pleasant experience for the user and others near the space,” he says. “It also increases the longevity of both the flooring and the fitness equipment.”

One might think that products made of thicker rubber are required, but there’s more to it than that, advises Steve Chase, the general manager of Fitness Flooring, an Indianapolis, IN–based firm. Rubber alone still telegraphs a fair amount of vibration and sound directly to the subfloor.

“What works better is an air layer beneath the thicker rubber, which allows for some dissipation of the shock before it impacts the subfloor,” he says. “As a result, we now see 1" to 1-1⁄2" rubber floors held up by rubber pedestals, which creates an air space of between 1⁄4" and 3/8". Creating a subfloor on top of the existing subfloor, using foam pads or rubber blocks, helps to dampen sound and vibration even more.”

As with the overall facility design, flooring choices should be based on the activities taking place in a particular space. In a free weight area, for example, Kelley recommends 2' x 2' x 2-1⁄2"–thick molded tile with an ultra-high-density wear layer. It’s designed to leverage the acoustical attributes of both rubber and air, offering maximum sound damping, shock absorption, and durability.

For a functional-training space, he suggests a surface designed for heavy use, with a thickness of 14.5mm, which includes a 2.5mm wear layer, and a 12mm shock- absorbing base layer. “It should be engineered to absorb the impact forces produced by aggressive functional training, and provide an ergonomically advanced surface that works well with the body,” says Kelley.

“While acoustics may not be the first thing that comes to mind when members think about the important features of a club,” Kelley says, “it has a surprisingly significant impact on their fitness experience.”

... as the lady waiting to speak to you at the front desk will attest.