As the COVID-19 pandemic continues, epidemiological evidence continues to suggest that physical activity is vital and essential, and that health clubs are not primary drivers of COVID-19 transmission.

Since the COVID-19 pandemic began, IHRSA has been compiling available evidence on modes of COVID-19 transmission, the relationship between physical activity, health status, and COVID-19 outcomes, and the impacts of COVID-related restrictions on physical and mental health. This evidence is compiled in the IHRSA Global Data Memo. This article highlights the three key conclusions to which available evidence points:

Physical Activity Is Essential for Physical, Mental, and Emotional Health

According to new guidelines released by the World Health Organization (WHO), physical activity confers a number of health benefits for adults including:

In children, physical activity is beneficial for: 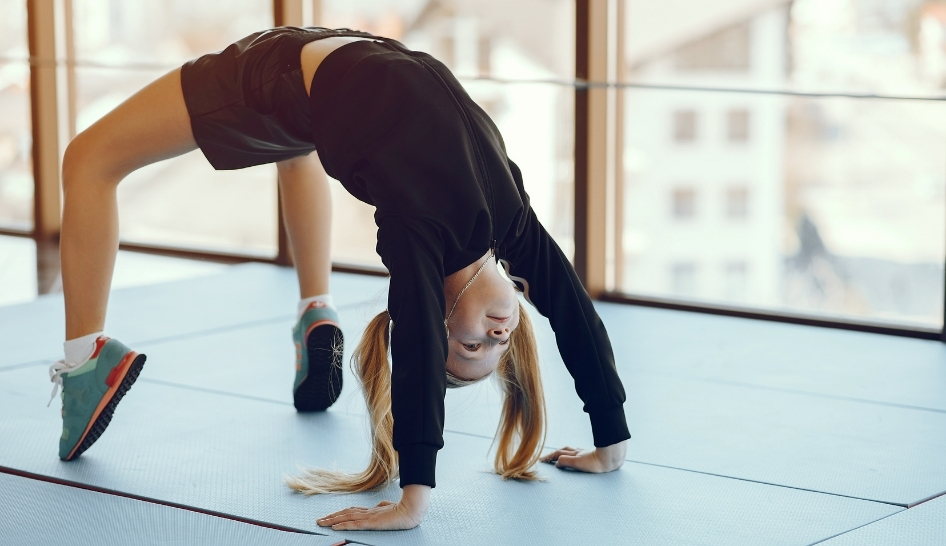 The newly released WHO 2020 Guidelines on Physical Activity and Sedentary Behavior also highlights the negative effects of prolonged sedentary time, which for many people can be hard to avoid. New research suggests even 30-40 minutes of moderate-vigorous exercise per day can mitigate risk factors associated with lengthy sitting time. This can be especially important during this pandemic, as physical activity during commutes, errand running, and social events have been curtailed.

Physical activity may be essential, but there was initial concern that health clubs were a high-risk location for COVID-19 transmission, given heavier breathing during exercise and indoor setting. However, data to date would appear to suggest the opposite: fitness centers operating with strict safety protocols in place are generally lower risk venues.

In August, several industry studies analyzed health club check-in data from multiple membership management software system providers in relation to club-reported COVID cases. These studies aimed to quantify the relationship between the number of COVID-19 cases in fitness centers and club traffic, as measured by check-ins. These studies found:

This research was affirmed by an analysis conducted by the University of Oregon’s Oregon Consulting Group (OCG). OCG researchers looked for relationships between check-in data based on 8.5 million health club visits in Colorado and publicly available contact tracing information. The analysis found no statistically significant relationship between gym attendance and COVID-19 cases.

A case control study published in the Centers for Disease Control and Prevention’s Morbidity and Mortality Weekly Report found that people who tested positive for COVID-19 were more likely to have dined in a restaurant or have had close contact with someone diagnosed with COVID-19. There was no statistically significant association between COVID-19 test results and visiting a gym.

“Available contact tracing reported by health authorities in several U.S. states show that outbreaks attributed to fitness centers (or categories including fitness centers) appear to make up a small proportion of total outbreaks. ﻿”

Air quality has been a concern as more and more evidence pointed to airborne transmission of the SARS-CoV-2 virus. While large scale evidence is not available, preliminary data collected as part of an ongoing study at the University of Florida found no detectable SARS-CoV-2 (the virus causing COVID-19) in the air at Gainesville Health & Fitness. Similar air quality analysis conducted in an Ohio Planet Fitness location also found no detectable SARS-CoV-2 virus in the ambient air or HVAC filters.

Research published in Nature suggests governments do not need to resort to widespread closures. While some reporting indicated this study showed gyms linked to COVID spread in the spring, the findings showed that gyms were lower risk compared to other indoor places like restaurants. The research, conducted at Stanford and Northwestern universities, found that capacity limits can be an effective method for controlling COVID-19 transmission while blunting economic damage. For example, in Chicago the study predicted limiting capacity at 20% of maximum occupancy cut infections—compared to a full reopening—by 80%, while only costing businesses 42% of their daily visits.

According to the CDC, people with physical inactivity related comorbidities including cardiovascular disease, diabetes, chronic kidney disease, and obesity are at higher risk of developing severe COVID-19 illness resulting in hospital admission, ICU admission, ventilation, or even death. A study including 287 patients hospitalized with COVID-19 in New Orleans early in the pandemic found that 66% had metabolic syndrome. Metabolic syndrome was associated with mortality, ICU admission, mechanical ventilation, and acute respiratory distress syndrome.

Lifestyle factors like physical activity have also been linked with COVID-19 outcomes. A UK study analyzing data on over 387,000 people found that individuals with the most unfavorable lifestyle factors (smoking, physical inactivity, and obesity) were four times as likely as those with the most favorable lifestyles to have COVID-19. According to their analysis, unhealthy lifestyles could be attributed to 51% of severe COVID-19 cases among the population.

A newly released pre-print found similar results. Researchers used genetic markers to assess obesity, alcohol use, lifetime smoking, and physical activity. They found a two-fold increase in risk of respiratory COVID-19 and COVID-19 hospitalization for people with obesity and lifetime smoking, and a five-fold decrease in risk of respiratory COVID-19 for people who were physically active.

During widespread restrictions at the start of the pandemic, physical activity levels sharply declined for many people. In a survey administered in Australia in April, 48.9% reported a negative change in physical activity, and an analysis of data from a popular free fitness app between January and June 2020 revealed a 27.3% decline in step count within 30 days of the pandemic declaration. An online survey of adults primarily in Asia, Europe, and Africa showed a decline in physical activity intensity during COVID-19 related closures, and an increase in sedentary time from 5 to 8 hours daily.

Negative changes in physical activity as well as smoking, alcohol use, and sleep were linked to higher symptoms of depression, anxiety, and stress in Australians. People who were sedentary for longer than 10 hours were more likely to have symptoms of depression. During the COVID-19 shutdown in Brazil, people who got more than 30 minutes of moderate or more than 15 minutes of vigorous activity had lower odds of having depression, anxiety, or both.

A survey conducted by RunRepeat found that, out of over 19,000 people surveyed, roughly 35% of people globally had gained weight during COVID-19 restrictions, with 71% gaining more than five pounds (2.2 kilograms).

People saw worsening mental health during restrictions. A study from Boston University School of Public Health found that depression rates tripled during COVID-19, going from around 8.5% pre-pandemic to 27.8%. According to CDC data, a quarter of young adults (ages 18-24) seriously considered suicide in the 30 days prior to the survey.

For Consumers, There is No Substitute for Their Health Club

Data from a survey conducted by Kelton Global and commissioned by IHRSA shows that for U.S. gym-goers, there is no substitute for their fitness center. The full findings of the study are reported in The COVID Era Fitness Consumer.

Gym-goers reported that the only thing they missed more than going to the gym (59%) was visiting loved ones (65%). They missed the gym more than they missed going to concerts or games (55%), bars or restaurants (51%) or even seeing movies in theaters (46%). 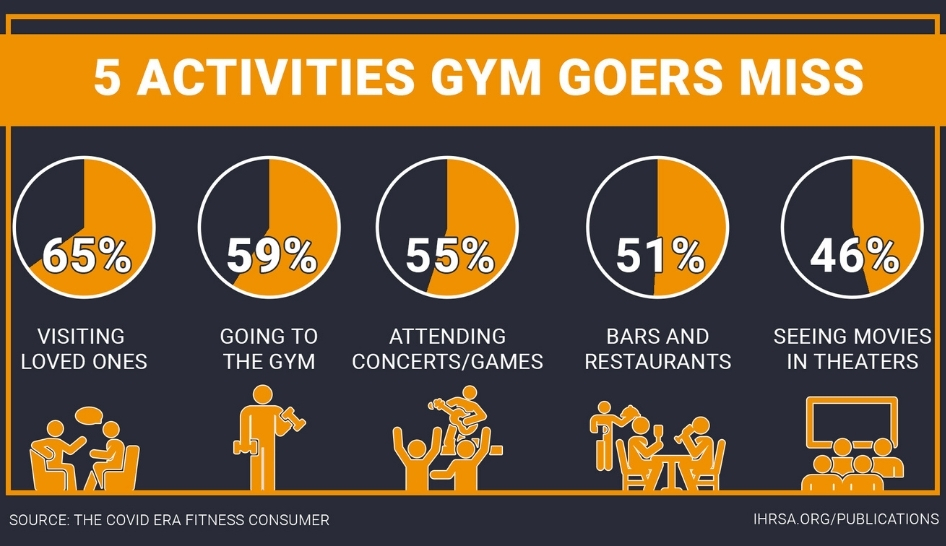 This may be in part because at-home workouts are not meeting their needs as well as an in-person fitness center. Fifty percent of gym members were dissatisfied with at-home fitness efforts and changes to their routine, primarily because they found these new routines to be less challenging (54%), less consistent (53%) or just simply worse (51%) than their regular gym routines.

This survey was not limited to just the young and healthy. People at elevated risk of COVID-19 due to preexisting conditions reported doubling down on their health commitments. Compared to those with fewer comorbidities, those at increased risk were more likely to say they’re committed to being more physically active (60% versus 56%). And 58%t of all gym-goers, regardless of current health, say that they are now more committed to being physically active, eating healthier (57%) and taking better care of their mental health (42%) than ever before.

Nearly every gym-goer missed something about their routine—95% reported missing at least one aspect of physically being in their gym. Most commonly cited was missing the routine of going to their gym (54%). Having limited equipment at home (54%) means they were unable to get the same variety of workouts (51%). This is especially notable given the importance of resistance training, which can be harder to accomplish at home with limited equipment than cardio. The survey data was collected in summertime when most people could be active outdoors, and it is reasonable to expect challenges of at-home fitness to increase in winter months.

Social interaction was also an important and missing factor. Two in five (42%) miss working out with other people, while a similar number (36%) miss the sense of community that comes with belonging to a gym. During a time when many social interactions are limited or impossible altogether, health clubs may provide a safe, controlled environment for social interaction and community, key tenets of social and emotional well-being.

All of the research included in this article is available in IHRSA’s Global Data Memo. Health club operators can use this research to provide empirical support for their arguments that fitness centers operating under strict safety guidelines are safe and vital to the community.