This is an IHRSA featured article, brought to you by TRUE Fitness.

No machine is more popular than the treadmill and none has had a more interesting history and growth curve.

Perhaps no piece of cardio equipment has had a more storied—or diverse—history than the treadmill. In fact, before anyone ever got on one to improve cardiac performance or endurance, animals and prisoners were the machine’s chief users.

The origins of the treadmill are not in exercise, but in engineering and labor.

In “History of the Treadmill,” author Josh Douglas-Walton writes: “In the 1st century AD, the Romans used a precursor to the treadmill, known as the treadwheel or polyspaston (Latin for ‘hoisting tackle with pulleys’) crane. This human-powered device was essentially a large wheel attached to a crane. Used in place of a traditional winch, men would walk continuously within a large hamster-like wheel.”

In this case, the movement of the wheel would cause the attached crane to lift heavy objects. Based on the wheel’s diameter, the treadwheel crane was around 60 times more efficient than the purely man-powered construction methods previously used by the Ancient Egyptians to build the pyramids.

The human-powered treadwheel remained a key piece of machinery up through the 13th century, with a form factor that still closely resembled that of a waterwheel.

“In the 19th century,” notes Douglas-Walton, “horses were placed on treadmills to operate stationary machines when renewable power sources like wind and water weren’t available. In rare instances, horse treadmills were used to power boats, particularly on the east coast of the United States. This iteration of the treadmill featured a horizontal belt that more closely resembles the models we know today.”

Later in the century, the horse-powered treadmill was adapted for a range of domestic uses. Smaller versions were developed for dogs, sheep, and goats for such tasks as operating butter churns, grindstones, fanning mills, and cream separators. 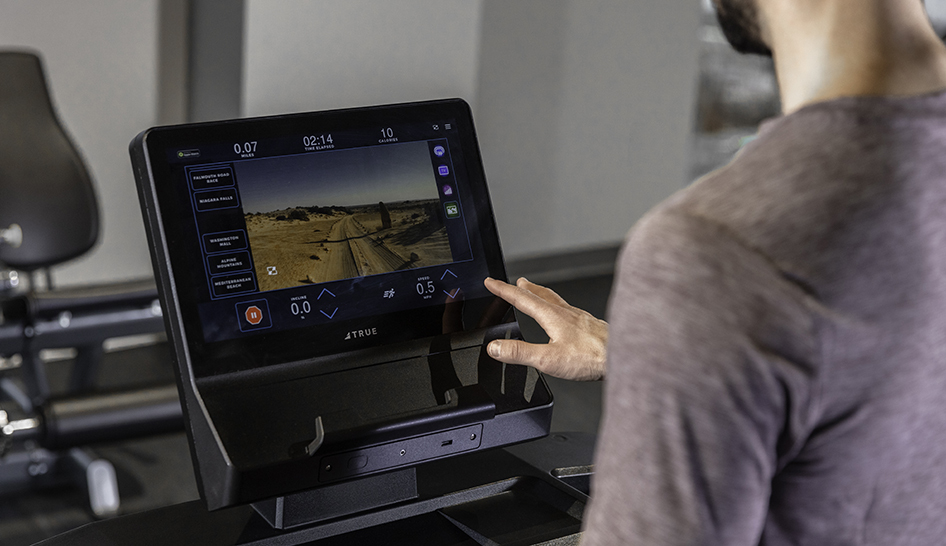 In 1818, an English engineer named Sir William Cubitt came up with the idea of utilizing treadmills for punishment. While at a prison facility at Bury St. Edmunds, Cubitt observed idle prisoners. He proposed using their muscle to keep them engaged while producing valuable work.

“These penal treadmills resembled treadwheels, insofar as they were large wheels,” records Douglas-Walton. “Sir William’s design, instead of having someone operate from the inside, had a series of steps fitted to the outside. Prisoners would essentially cling to hang holds and climb the steps which would turn the wheel. Because the treadmill was self-propelled, providing there was at least one prisoner still climbing, the wheel would continue to move.”

Punishment treadmills were typically 20-foot-long paddle wheels with 24 steps around a six-foot cylinder. In operation, prisoners would stand side-by-side on the wheel, working six or more hours a day and effectively climbing 5,000 to 14,000 vertical feet.

Among the longest-documented climbs, adds Douglas-Walton, was at Warwick Gaol, a prison in Warwick, UK, where prisoners climbed a combined 17,000 vertical feet in the space of 10 hours. The distance is the equivalent to climbing the Empire State Building 13 times.

These devices remained in use through the second half of the 19th century.

In 1913, inventor Claude Lauraine Hagen was granted the first U.S patent for a “Training-Machine,” featuring a treadmill belt. His description of the machine was both detailed and ahead of its time.

“In carrying out the invention,” he wrote, “I provide a rectangular frame, in the side pieces of which are mounted a series of rollers, such as shown in my aforesaid patent, over which rollers I prefer to mount distributing and wear take-up belts forming additional treads as well, and over such take-up belts I provide a tread or toe gripped belt of a peculiar construction, preferably formed with lateral slats joined by flexible hinged joints. I provide means for independently taking up the slack on the wear tread belts from the means used for taking up the slack in the toe gripped belt. In order to reduce the noise of the apparatus, I mount the rectangular frame on four posts, each terminating in a rubber or other elastic foot step.”

Hagen even designed his machine with removable side posts to make shipping easier. 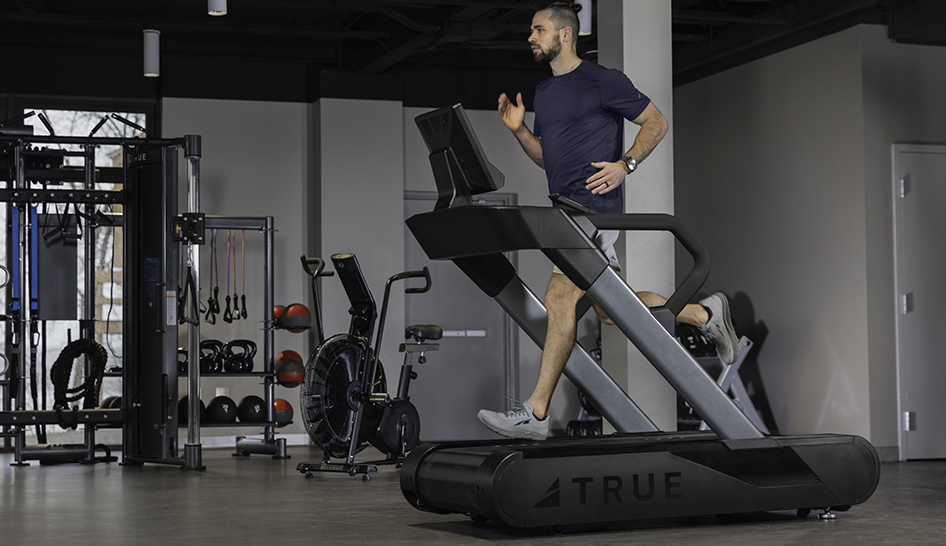 While several manual treadmills would be introduced over the next few decades, the first motorized treadmill would be invented by American cardiologist and a professor at the University of Washington, Dr. Robert A. Bruce—dubbed “the father of exercise cardiology” —and his assistant Wayne Quinton in 1952. Bruce would use the machine to perform cardiac stress tests in diagnosing chronic illness.

TRUE Fitness certainly has a unique perspective on treadmill development, having been established as a residential treadmill company in 1979. Nine years later, the company entered the commercial space.

“Treadmills have gone through substantial updates and changes over the years,” notes Jared Kueker, director of product development at TRUE. “And we’ve had the opportunity to lead with a number of innovations since our founding more than four decades ago.”

Kueker highlights a number of milestones. In 1987, TRUE introduced the first removable safety key on a treadmill. Five years later, the company debuted its patented Soft System, which transfers the shock of impact that’s usually absorbed by the walker or runner’s body into the treadmill itself. In 1994, it developed an orthopedic treadmill belt for even greater shock absorption.

“On the technology side, we offered the Heart Rate Control (HRC) feature, which monitors heart rate, in 1996,” he says. “In 1998, we came out with the patented Soft Select feature, designed to allows users to select the firmness of the belt. In 2007, we introduced HRC Cruise Control, which gradually adjusts speed and incline to maintain a constant target heart rate.”

A wide range of technological advances can also be found on TRUE’s new Stryker Slat Treadmill.

“Our latest Stryker Slat Treadmill introduces built-in wireless charging in our consoles,” Kueker says. “Our consoles offer a range of technologically advanced options including full connectivity, built-in programs, and mirroring in select options. Unique to TRUE, the HRC System automatically adjusts both speed and grade based on your users’ target heart rate. If members have a condition where the traditional target heart rate formula does not apply, TRUE treadmills feature the Cruise Control button. Users simply press the button when the stress level feels appropriate and the treadmill will automatically adjust to their selected heart rate during the exercise session.”

In addition, the Stryker’s Bluetooth connectivity allows users to connect to compatible apps, such as GymTrakr and Zwift, via compatible consoles. Select consoles are Apple Gymkit enabled, which allows users to pair their Apple watch with any compatible TRUE machine to track their workouts accurately and efficiently.

Along with new technology elements, the Stryker offers a different feel for users, as a slat treadmill more closely mimics the feeling of running outdoors, while a standard treadmill provides a more cushioned experience. In addition, a slat treadmill requires less maintenance than a standard treadmill. The unique shock-absorbing design provides extra cushion where feet impact, allowing for a higher durometer and more durable slat. The durability of the slats means little or no wear on the deck or parts, allowing the heaviest use without the need to replace the traditional treadmill belt and deck.

To learn more about the TRUE Fitness Stryker Slat Treadmill and its full range of cardio and strength equipment, visit their website.