This article appeared in the print edition of Club Business International in January 2020.

Scott Stratten, author, professional speaker, and the president of UnMarketing Inc., will discuss “UnSelling: The New Customer Experience” on Thursday, March 19, from 8:30 a.m. to 9:45 a.m., during IHRSA’s 39th Annual International Convention & Trade Show in San Diego. His appearance is sponsored by Technogym. 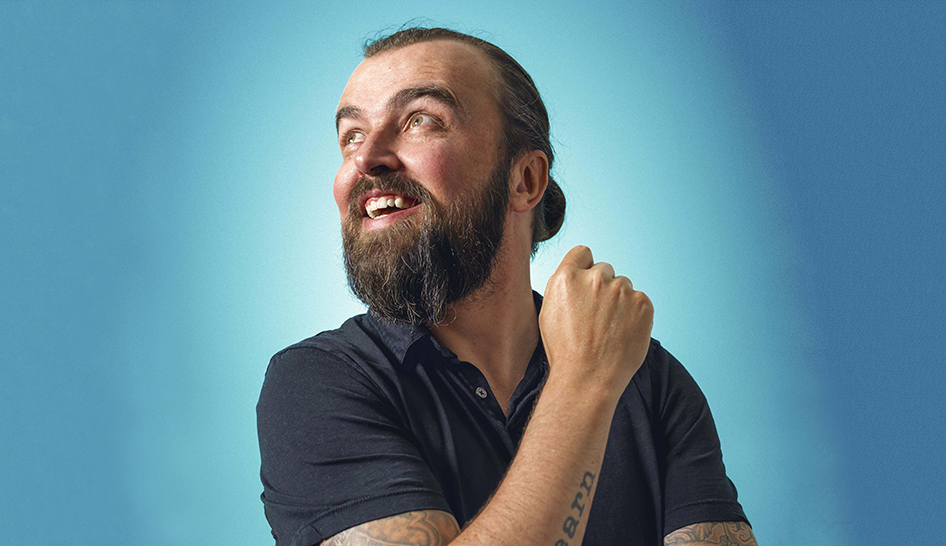 Formerly a music industry marketer, Stratten today is an author, a professional speaker, and the president of UnMarketing, Inc., and UnMarketing.com, a multifaceted Toronto-based business. CBI sat him down to ask about his upcoming talk at IHRSA 2020.

CBI: A Forbes.com interviewer once described you as “social media Rockstar Scott Stratten.” Which of your achievements do you think he had in mind?

SCOTT STRATTEN: I wish it was about my successful career as a heavy-metal singer and band manager, but neither of those turned out to be successful. When I realized I didn’t have the vocal ability to make it as a singer, I fired the band and stayed on stage as a speaker. But, more likely, it was because I look more like a roadie than a business speaker.

SS: Very much so. My brain is wired for hooks, things that grab one’s curiosity, and I came up with the name UnMarketing for my company almost 20 years ago because I thought it did that, summarized my thoughts, and would look good on a book cover.

CBI: Where did this signature UnPremise come from? Was there an “Aha!” epiphany?

SS: It came out of frustration. So much about business was all “Buy or Bye,” blasting messages as far as a company could afford, interrupting everyone. We call it the “Push & Pray” method. We wanted to talk about “Pull & Stay”—pulling your target market towards you, and controlling the outreach with value, so that, when they had a need for your product or service, they picked you.

But the “Un” part of it all was the result of looking at the big picture—acknowledging that everyone at a company was a part of the brand, and influenced most of the brand stories customers were telling. The front-line workers especially. If you want to improve the bottom line, empower the front line.

SS: We were going to do “UnNetworking,” but the book would only have contained one line, which would have read, “Don’t be a jerk to people.” Our newest book just came out; it’s called “The Jackass Whisperer: How to Deal with the Worst People at Work, at Home, and Online—Even When the Jackass Is You.” So, I guess we actually did write UnNetworking.

CBI: You and your wife, Alison, have written a number of best-selling books, including “The New Customer Experience,” the title of your IHRSA 2020 address. A little preview, please.

SS: Sales isn’t about the transaction. It’s about what comes before and after. Are we over-promising just to get that sale, which often leads to the experi­ence gap—the gap between their expectations and their experiences. And, after the sale, one of the most valuable things for most businesses are the referrals. Word of mouth is amazing, but what words are our customers saying about us?

CBI: Can you relate this, specifically, to the consumer of health club services?

SS: I come in for a facility tour. Smiling faces greet me, and I’m taken around, to see if I’m interested in locking in. Towels are aplenty, equipment is available, everything is easy-peasy. Then I sign up, come back for my first few sessions, and, now, people don’t greet me the same way.

I have a “free” session with a trainer, who reads a phonebook instead of focusing on me. Then it turns into a high-pressure sales meeting from a different sales person, who says, “Some men don’t have to ask their wife for permission,” when I tell him I want to talk it over with my spouse.

“If you want to improve the bottom line, empower the front line.”

I know—because that’s what happened to me!

I cancelled on the spot and jumped through their 13 hoops to stop payment.

I can promise they generated word of mouth—just not the words they wanted.

The thing was: they had me! I was converted into a member, and was ready to have them accompany me on my wellness journey, but was immediately turned into a number and an up-sell prospect.

CBI: You’ve described your key role as helping companies “to navigate the viral, social, and relationship marketing landscape.” What do club operators need to know about this world?

SS: We’re in the fitness industry’s golden age of social media. Visual is now everything—between Instagram, Pinterest, and TikTok—but there are caveats. For instance, people filming themselves in your facility causes privacy concerns for other members. There’s a fine line between embracing the exposure and protecting the privacy of members.

CBI: One of the defining attributes of your work is that, while it deals with cutting-edge topics, it invariably reminds us of business basics: e.g., that employees matter.

SS: Brands aren’t logos or even, necessarily, facilities. They’re the experiences at your club. And those are driven by your people. If you don’t hire, and train, and empower them well, the equipment and facility matter less. You have so much competition—from the couch, Netflix, comparable clubs, other types of facilities, digital fitness technology. … It becomes easier for members to just not go to your club. They have to really enjoy the experience.

CBI: You describe the merging of “basics” and “cutting edge” as a case of “sustaining the good, while seizing the new,” a notion reflected in the title of another one of your books, “Everything Has Changed, and Nothing Is Different.”

SS: It’s a great definition of what’s going on in your industry right now. Disruption is breaking down the health and wellness door. We have a treadmill at home, a Peloton bike, and a few trainer apps; and we’re pay-per-session members at a private boutique gym with a trainer. But I haven’t been to that gym in almost a year, not because I don’t love it—I do—but because I’m on the road a lot.

“Brands aren’t logos or even, necessarily, facilities. They’re the experiences at your club.”

If they offered a Facetime session with my trainer on the road, I’d sign up and prepay in a second. I’ve practically begged for that option. Instead, they don’t get any revenue from me because what they do is only done in the club.

It’s their choice, and it doesn’t upset me. They just don’t get my money.

I shouldn’t have to convince you to take my money.

CBI: You told Forbes.com, “I get fired up by a company being awesome, but equally crazy by a company pushing a customer around.”

SS: Your industry is one of the top offenders in this regard. You say that you want to change people’s lives, but some places make it so prohibitive to cancel that I wonder if they’re in the business of making people’s lives better, or if they’d prefer that everyone just stay at home, and let them collect a monthly fee … because, when I cancelled, I had to send a letter to the Queen, signed by the Pope on the 30th of February, and drop it off in person on Mars.

SS: One that’s flush with glowing five-star reviews without having to ask for them—that’s awesome!

CBI: And an unawesome one?

SS: The one that views the customer as a pain, an interruption, and wish they’d just “Buy or Bye.”

CBI: You’ve observed, “This is the age of disruption—it’s fast-paced, far-reaching, and is forever changing how we operate, create, connect, and market.” What company do you think has mastered this age?

SS: I never in my life thought I’d name an airline that defined this, but, if my experience is indicative, Delta has really turned things around and embraced service and technology seamlessly.

CBI: Another way in which you’ve “starred” on social media is by meeting your wife on Twitter—correct?

SS: Back in the heyday, circa 2009, I’d be on Twitter nightly, since I had two younger kids, and, after getting them to bed, I’d hop online to get my parent-connection fix with others. Alison came across my radar, and we connected quickly. We met in person a bit later when she asked if I could review her website. We met at a local coffee shop and talked for eight hours. We haven’t stopped since. … And I never did review her site.

CBI: Finally, because we just can’t resist it: If you were to write a book about the fitness industry titled, predictably, UnClub—what would it have to say?

SS: UnClub: Why telling a keynote speaker that he shouldn’t have to ask his wife about something is a bad call.