Growing your business is great for your bottom line, but it's also great for the health of your community and the world. That's why even if you're a small town health club, international organizations could help your business.

For more than 30 years, club operators have been trying to figure out how to reach the people who are not exercising and bring them through the doors of our clubs. We have been chasing that 80% of people since May of 1989 when IHRSA launched "Commit to Get Fit," the first public awareness campaign.

Now, while great education and networking events—like the ones found at IHRSA conventions—alongside with improved equipment and programming have certainly helped club operations grow since that launch, we are still fighting to attract that elusive 80% of people.

Currently, there are a total of 162 million health club members worldwide, and at IHRSA 2018, Derek Gallup, ex-officio of IHRSA’s Board of Directors and EVP of Fitness for New Evolution Ventures, announced the industry goal to bring that total number to 230 million members by the year 2030. This goal builds on IHRSA’s long-term vision for its members to be recognized as a primary solution to reversing the global inactivity crisis.

Both goals are based on the premise that clubs can’t fight the inactivity crisis alone. Fortunately, international organizations, national governments, and influential public health and medical organizations have begun to recognize the enormous cost on the personal and societal level of inactivity. 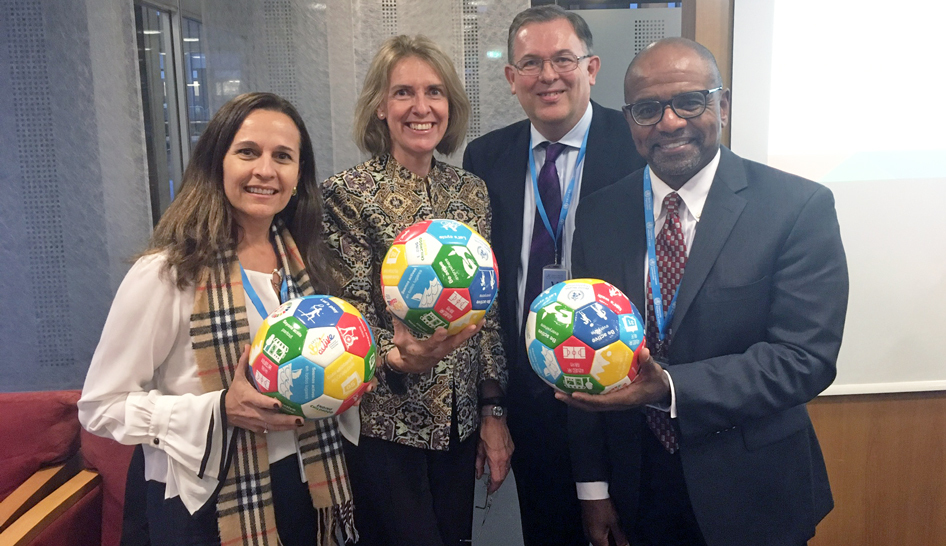 In 2018, The World Health Organization (WHO) released its Global Plan on Physical Activity 2018-2030 and set a goal of reducing physical inactivity for adults and adolescents by 15% by 2030. The United Nations established Sustainable Development Goals (SDGs), which recognize the importance of physical activity in many goal areas. Notably, SDG 3.4 aims to reduce premature mortality by one third and promote mental health and well-being by 2030 through the prevention and treatment of non-communicable diseases (NCD). Reaching this goal could result in 8 million more health club members in the U.S. alone.

If you’re asking yourself how can the goals, whitepapers, and research done by the U.N., UNESCO, OECD, WHO, and others impact your club? We’ve identified five ways that international organizations can help get more people into your club.

1. Elevating the Importance of the Problem

When international organizations speak, people listen. There are numerous reports and studies—from organizations with the ear of national governments, health ministers, medical authorities, businesses, academics, and members of the media—saying that physical activity is a global problem that we need to address.

For the past three years, IHRSA has been a proud sponsor and participant in the Business at OECD Forum on Health. The most recent forum, held in December 2018 at the Organization for Economic Cooperation and Development (OECD) headquarters, brought together CEOs, high-level government officials, health and physical activity advocates, and more to explore the role digital technologies and strategic partnerships play towards the success and well-being of economies and societies.

Through these forums, stakeholders evaluated the importance of physical education, physical activity, and sports for all people, and concluded physical inactivity is a public health issue that deserves the attention of policymakers in order to preserve long-term economic growth and productivity, as well as societal health.

2. Moving Physical Inactivity from the ‘Nice to Solve’ to the ‘Need to Solve’ Category

Discussions about incentives for physical activity—like the PHIT Act—in Washington, D.C., can be tough to follow. While most members of Congress agree to the importance of physical activity, some view physical inactivity as a problem that would be nice to solve, but one that we do not need to solve.

The WHO report addresses the flaw in this way of thinking, saying that, “Failure to recognize and invest in physical activity as a priority within NCD prevention and treatment represents a missed opportunity. Ongoing inaction will see the costs of physical inactivity continue to rise, contributing to further negative impact on health systems, the environment, economic development, community well-being and quality of life for all.”

3. Getting Active is About More Than Individual Behavior

IHRSA’s work with national and international organizations is helping to dissuade policymakers from the idea that an individual’s behavior is the sole reason for their physical inactivity. The Lancet Series on Physical Activity captured this reasoning best, “But how do we encourage a behavior that should be part of everyday life? For too long the focus has been on advising individuals to take an active approach to life. There has been far too little consideration of the social and physical environments that enable such activity to be taken. Regular activity must, of course, be done by the individual, but as this Series shows, efforts beyond the health sector through social and environmental change will be necessary if we are to see greater uptake of this healthier behavior in people's lives.”

In an article in Morning Consult, I wrote, “There is no shortage of evidence on the positive effects of exercise—just a shortage of public policy attention on it.” Policymakers must recognize physical inactivity as what it is—a public health crisis—to take meaningful action.

The WHO Global Action Plan on Physical Activity (GAPPA) calls for a paradigm shift in all of society. We do this by enhancing our knowledge, understanding of, and appreciation for the multiple benefits of regular physical activity, according to a person's ability and at all ages.

To make this paradigm shift happen, the WHO initiated a series of meetings—starting with the first ever Sports Sector dialogue in December 2018 with IHRSA, UNESCO,
UNESCO Chair, World Federation of the Sporting Goods Industry (WFSGI), and other key global organizations—to engage the sports, recreations, and fitness industry to strengthen and scale effective action. Ultimately, the goal is to see a 10% relative reduction of physical inactivity in adults and adolescents by 2025 and a reduction of 15% by 2030.

The IHRSA Delegation—led by Kilian Fisher, IHRSA’s international public policy advisor, and Monica Marques, IHRSA Board of Directors member and Companhia Athletica’s fitness director and owner/partner—represented a cross-section of interests. At the most recent meeting in February, the delegation discussed concrete actions that could be taken to get more people physically active including global communications campaigns on physical activity, joint initiatives to address priority issues, and populations such as inequities in participation by girls, women, disadvantaged communities and people with disabilities, as well as additional programming in targeted countries.

Recently, IHRSA Chairperson Jim Worthington spoke at a briefing and discussion at the
UNESCO Chair led event at the United Nations HQ on "Driving Government & Private Investment and Action in Inclusive Sport." Jim spoke about UFIT—which was developed by and led Globally by the UNESCO Chair in partnership with IHRSA as the Global Industry lead—and its connection to Newtown Athletic Club, and its impact on the industry saying that at Newtown Athletic Club, UFIT brings people and organizations together to give people of all abilities a home at the club. At the UN, Jim’s remarks reminded government officials, diplomats, academics, and others that the club industry can and will be a partner in getting the world more active. One community at a time or one program at a time. After all, if we meet the WHO’s goals and increase the number of physically active people worldwide it will be a win-win for the club industry and global health.

Despite the overwhelming evidence that activity cures so many of the health problems ailing us, people are not getting enough exercise. The forces at work driving the physical activity crisis require concerted action from a wide range of stakeholders. Together we can make a difference.