Industry veterans Chris Craytor and Brad Simpson say we’re all in this together, and have five tips to share if you need to talk to your landlord soon.

5 Tips for Negotiating With Your Health Club’s Landlord

No one is immune from the pressure COVID-19 is putting on the economy. Industry veterans Chris Craytor and Brad Simpson say we’re all in this together, and have five tips to share if you need to talk to your landlord soon.

In these challenging and unprecedented times, many health club owners are asking themselves questions they never thought they'd need to consider. Including how do I negotiate with my landlord regarding my lease while forced to close?

We know this question has been on a lot of fitness professionals' minds. That's why we asked Chris Craytor, IHRSA Board Member and president/COO for acac Fitness & Wellness Centers, a regional club chain that serves 65,000 members in Virginia, Maryland, and Pennsylvania, and Brad Simpson, vice president-strategic initiatives at Legacy Management Group, Inc., to share their tips for negotiating with your landlord during this crisis.

We asked for their top three tips, but they wanted to share five things they want you to consider as you approach your landlord.

Watch the video above for more information—trust us, it'll be eight minutes well spent. You can also read the transcript below.

5 Tips For Negotiating With Your Landlord 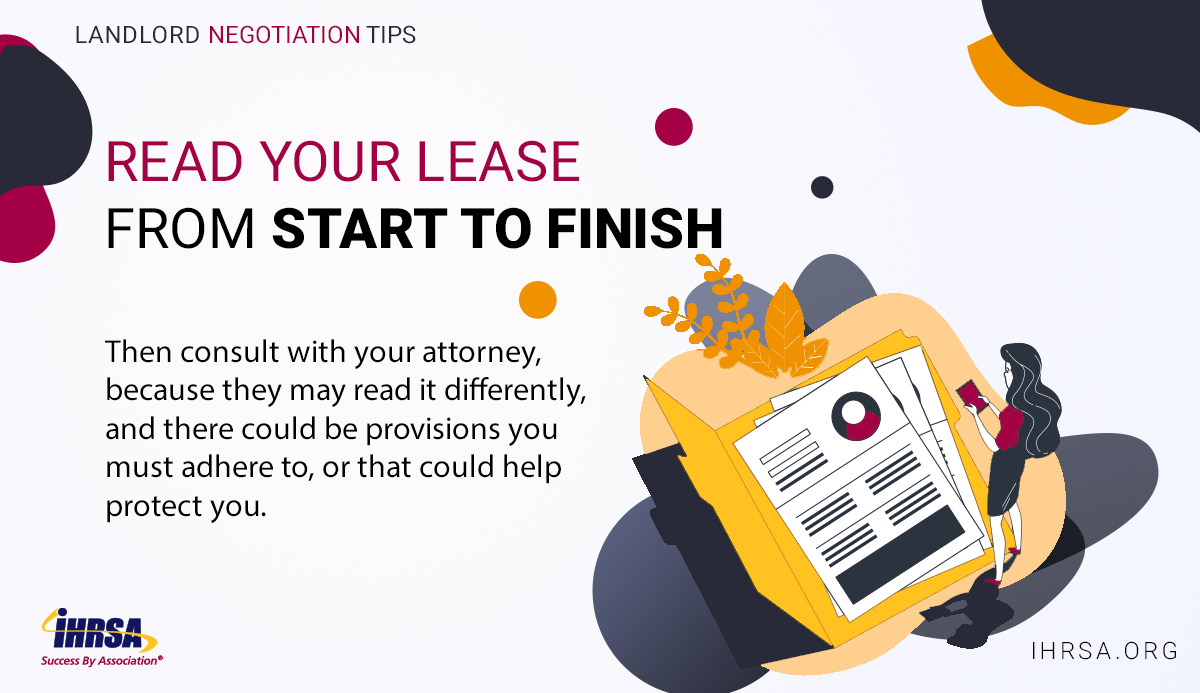 1: Read Your Lease From Start To Finish

SIMPSON: The first is read your lease from start to finish, and then read it again.

Then consult with your attorney and have them read it, and then go over it with the attorney. Because you're going to both read it differently.

And it's important. There can be little provisions in there that you think are not important but they actually are now.

CRAYTOR: So, for example, in some cases, we had some leases that anticipated such an event. Shutdown driven by a government entity. So given that's the case, we were able to notify our landlords of this shutdown in writing, as indicated by the lease in order to protect our rights as tenants under our lease.

So, be careful when reading your lease as related to these Acts of God or government shutdowns or anything that's outside of your control that there may [be] other stated provisions inside the lease that should be adhered to. Specifically, to protect yourself in the event of any kind of future legal action regarding your rent. 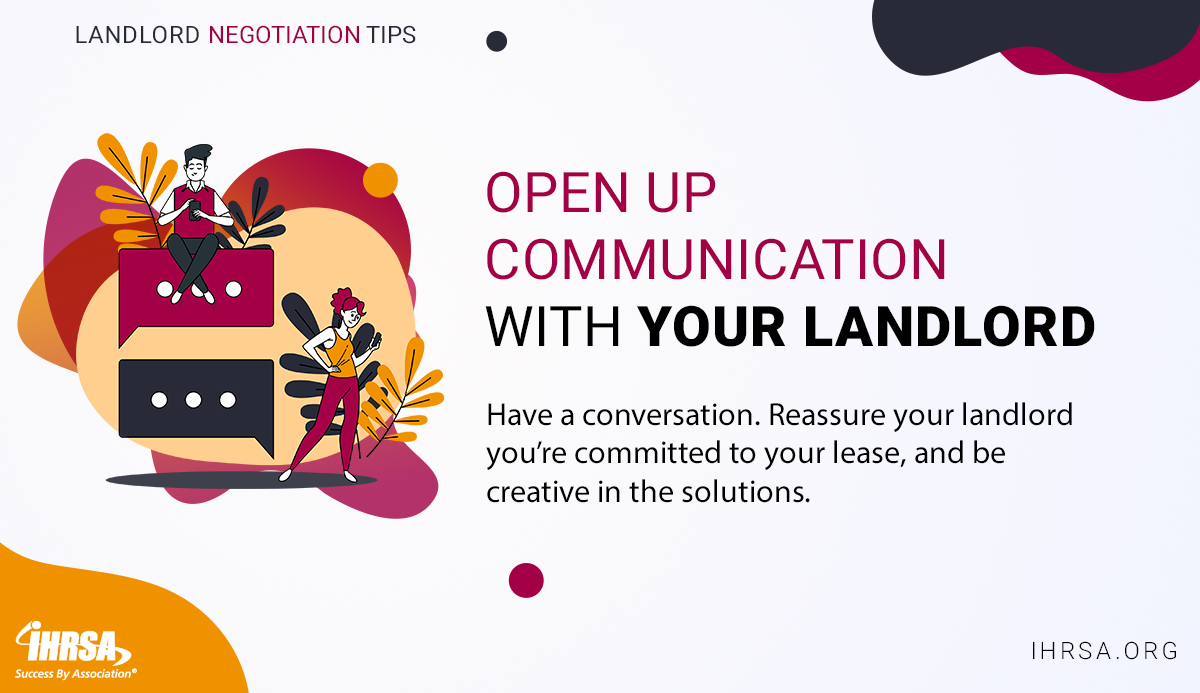 2: Open Up Communication With Your Landlord And Have A Conversation

SIMPSON: And then once you realize you're in the situation where you may not be able to pay your next month's rent, open up communication with the landlord and have a conversation, 'cause this is, you know, a shared event, so everyone, including that landlord, is in the same position.

Don't run away from the problem. Don't try to hide from it because, honestly, if someone wants to follow the letter of the lease, they can begin proceedings against you quickly if you don't pay, and you haven't communicated.

You don't necessarily want to call and say, "I'm not going to pay you." Because that would be [similar] to default, so it's more of a conversation, "Hi, this is an unprecedented situation. This is an unusual event. We don't want you to panic, because we're not panicking. You know we are still committed to this lease. We want to figure out, you know, creative ways to make this work for both of us."

CRAYTOR: In the places where we have landlord relationships, there's not been one who has not been willing to work with us. But there also hasn't been one that beforehand we didn't have a relationship with. At least in terms of general speaking terms or monthly check-ins or quarterly check-ins that type of thing.

I think, have the relationship, and then during that crisis situation, you're more likely to get what you need from that. And it's not too late to start. Look, as Brad said, initially communicate. Be open. Be honest.

We all know that this, we all know about this issue, we're all going to be affected by it. So no one here is ever going to ... say that they're immune from some of the pressures that are being put on the economy.

SIMPSON: I mean, it is daunting to pick up the phone and call someone that you don't regularly communicate with, and yes, that's difficult, but understand that as soon as you do it, you will feel better.

I mean there were certain landlords that we don't talk with a lot or all the time. We do have great relationships with them, but it's not, you're not necessarily going to have coffee with your landlord every week. You know, most of us are not.

So, it's honestly just as, and I make it sound simple, and it's not. Just call them, and even if you're leaving a message, you know, "Hey, I need to talk to you about our lease." And when they call back, it's just an honest conversation about, you know, "Hey, we're in an unprecedented situation. I know you're affected, too. We're trying to figure it out. We're reacting day-by-day. We're not panicking. I don't want you to panic. We're still committed to your location."

CRAYTOR And the key element there is call. There's far less chance of a conversation going wrong than an email. … Especially in tense times when you're looking for things to go wrong. There's a lot to pick apart in the written message that maybe was not even intended. So, by all means, call, when available.

And you know, there is no stigma here. Look, I mean, there's no stigma for wanting to go out and get this deal. 'Cause guess what? Your landlord's going out to get the same deal.

Your landlord, if he or she is doing their job, is calling their bank and saying, "Hey, give me a deal, and let me know if I can defer my payment." They're having the same exact conversation.

So, I think they're going to be surprised if you don't call as opposed to worried that you might. Pick up the phone. Go get the relief that quite honestly should be available to you. 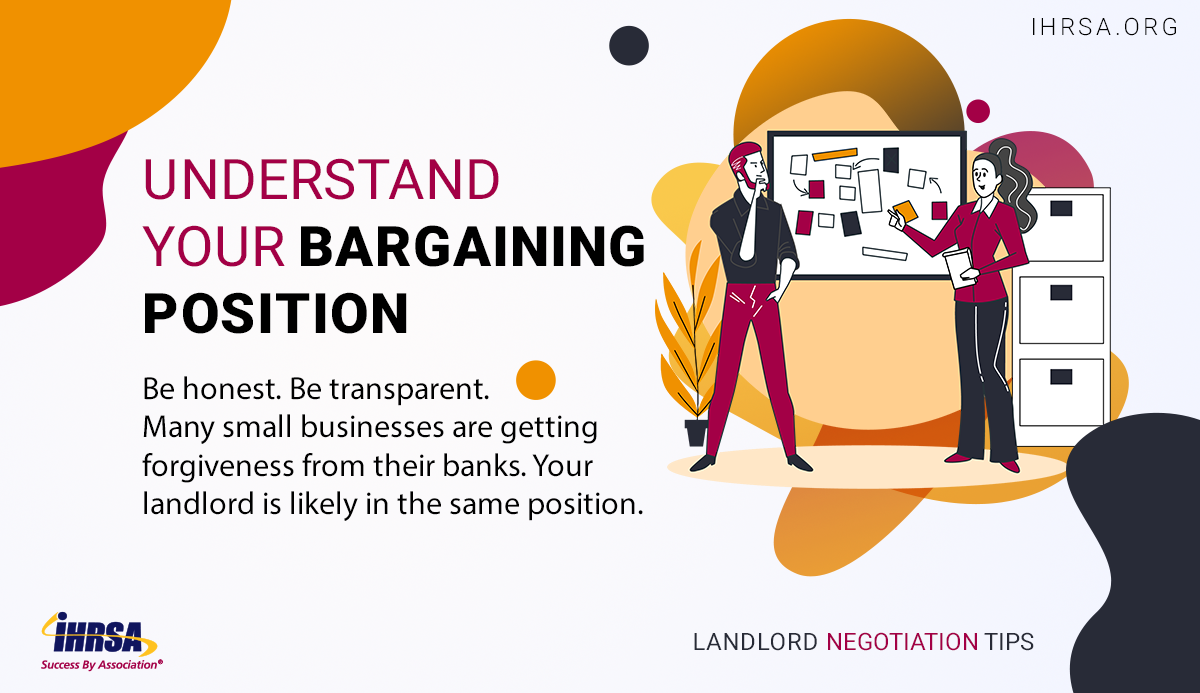 3: Understand Your Bargaining Position And Be Honest And Transparent

SIMPSON: And third, understand your bargaining position or just be honest and be transparent.

Most small businesses are getting forgiveness from their banks for a certain window of time. So, your landlord is likely in the same position. When they tell you, "Well, now I can't pay my loan." That's not entirely true. It may be in certain cases. It may be that you educate your landlord on the fact that they can get forgiveness at their bank.

So as Brad indicated, assuming you have an open line of communication letting landlords know that you plan on suspending rent payments for a period of time is not unusual or unheard of in this situation. In fact, most landlords are probably already expecting you to have that conversation.

SIMPSON: Some of this is also understanding that there is not another tenant waiting to fill your space immediately.

So any pressure that you may feel or the landlord may put upon you—in a growing, bustling economy that may be the case—that's not the case now. There's no one else that's in line ready to fill your location.

So if it's a matter of trying to talk to that landlord about, “Hey, instead of everything being due on the 1st how about we do a percentage and on the 15th after we see where we are with our memberships and our visits, we do X.”

I mean it's going to have to be creative. So we're looking at this in the long term. So 15 years from now, where are we going to be, and how do we structure that in the short term so we get to year 15? 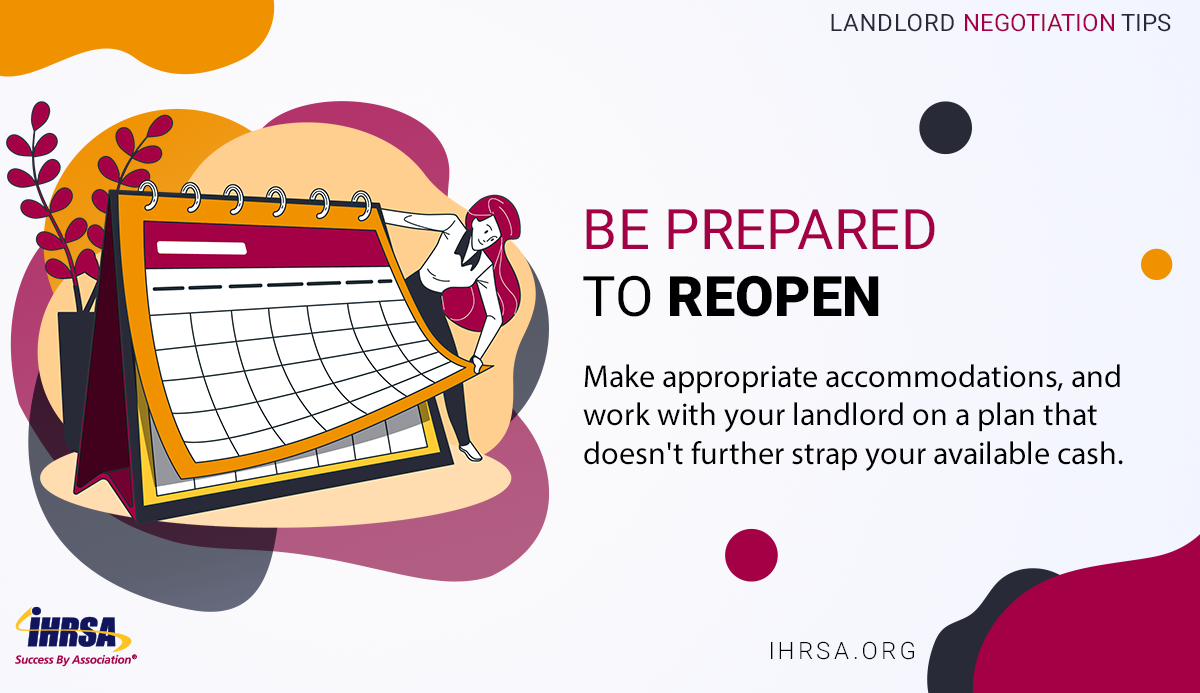 4: Understand What It's Going To Look Like To Reopen And Make Appropriate Accommodations

CRAYTOR: Understand what it's going to look like to reopen and make appropriate accommodations. So, that with your landlord you're working together on a reopening plan that doesn't further strap your available cash.

So, the question will be how does it look when you want to reopen? What are your expenses going to be?

How do we negotiate effectively with our landlords to reopen without necessarily [incurring] the steep curve of immediate payment due of the rent they are owed? 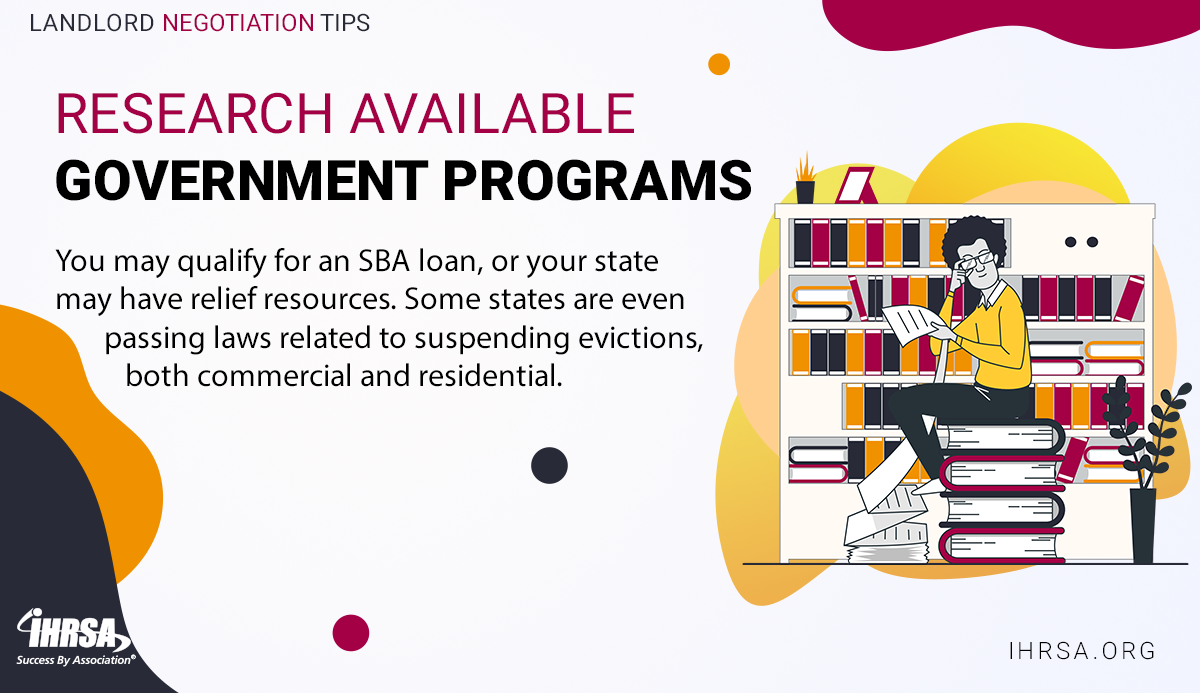 5: Do The Research On Government Programs That May Be Available

CRAYTOR: And finally, do the research on the government programs that may be available to help you bridge the gap not only on your operational and wage cash flow but also from a real estate perspective.

Many club operators may be eligible for SBA loans that will, in part, pay their rent and/or wages that may not need to be repaid under certain provisions. You may or may not qualify in your individual club, and we recommend ... doing that research at least to see if you do.

You may also—even in the worst-case scenario where you can't pay a bill [and] you're between a rock and a hard place—you may have a legal remedy should someone attempt to evict you from your property.

So, Brad and I are not lawyers to be clear. So, by all means, I think all of this should all be prefaced with, "Hey, go talk to a lawyer."

And make sure that you have somebody with a legal mind and a legal degree looking at this. I feel that too often people feel like they're amateur lawyers and can do this themselves. We're smart enough to know that we don't know everything, and smart enough to know when we need to get lawyers involved. That's a shoutout to Helen Durkin from IHRSA, by the way.

For a comprehensive list of all IHRSA resources created to help health clubs navigate the coronavirus outbreak, please visit our coronavirus resource page.